When defending against missile attacks, a shield bearer may opt to "hide behind" his shield thus providing an enhanced AC bonus.  This entails ducking ones head behind their shield and trying to keep as much of ones torso and extremities protected as well.   Such action provides an increased bonus against all missile attacks from one direction.  When deploying a shield in this manner, the character cannot attack in any way or cast spells, and any movement is at half the usual rate.  This bonus includes (i.e. is not in addition to) the normal AC advantage provided by the shield. Dexterity bonuses (or penalties) are negated by this method of defense.


e.g. A character wearing studded leather armor (AC 7) and carrying a medium shield is caught in the open under heavy fire from archers.  He chooses to use his medium shield as shelter from the arrows, providing a +4 advantage rather than the typical +1.  He now has AC 3 against any missile assault from one direction.


[EDIT: Looking at this rule now in 2013, I can't remember ever using it.  Even house rules sometimes go the way of Weapon Speed Factors]

Characters who do not use a weapon proficiency slot to gain proficiency in shield suffer a non-proficiency penalty with any weapon they use whilst also using a shield.  If they also happen to be non-proficient in the weapon, the penalties are cumulative.

e.g.  Telzar the Prestidigitator is out of spells when his companion Gordo the Goliath falls in an assault of goblins.  Telzar picks up Gordo's shield to defend himself, while attacking with his dagger.  While he is proficient with daggers, he clearly is not proficient in shield use, so he will attack at -5 (NP penalty for MUs) for as long as he attempts to defend himself with the shield.  He's better off just hiding behind it and forgetting the attacking business; see Shield Rule 1 above.

[EDIT: This one has never ever come into play.  Fighters in my campaign tend to only carry one or two weapons; weapon proficiency rules are pretty much irrelevant.  No one else ever picks up a shield.] 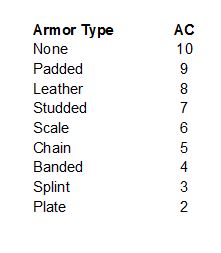 When opponents are closing for melee, the dude with the pole arm always wins the initial intitiative.  Thereafter, the shorter weaponed combatant must "burn" a hit--no damage is inflicted--in order to close within range to use his weapon.  The pole-armed combatant must then either drop his pole arm and draw another weapon for close combat or spend a round withdrawing to an adequate distance to attack with the pole arm again--space permitting.

Check it out in action:


Elmo, a 4th level ranger wielding a +2 battle axe, is charging at Bonzo the Brigand, a Voulgeur.  Bonzo, by virtue of his substantially longer weapon (voulge 8' vs. Battle Axe 4'), gets the first attack but, needing a 19, he misses the superiourly armored Elmo.  In order to penetrate Bonzo's perimeter, Elmo must score a successful hit vs. AC 7, he rolls a 4 and fails.


They roll initiative for the next round, Elmo wins but again fails to hit, and thus has failed to close within range to use his battle axe.  Bonzo gets another free shot--a 19! He hits for 5 points of damage.


Round 3, Elmo wins initiative and finally scores a "hit"; though he inflicts no damage this round he has moved within striking distance.  Bonzo, not at all interested in meeting the business end of Elmo's battle axe and with plenty of room behind him, chooses to fall back.  Elmo, frustratingly, is back where he started.


The next round, Bonzo wins initiative but misses.  Elmo hits again--still no damage--and then wins initiative the next round.  Bonzo has had no time to retreat and so Elmo gets to molest him with his axe.  He makes the most of it, cleaving poor Bonzo's carcass (hp: 5) for 13 points of damage.

[Pole arms were briefly in vogue in my game as a direct result of the very situation described above; in the V of H, a weenie little bandit held off Elmo for several rounds and then actually escaped with his life.]

Infravision is nice as a last resort but should not be the sole means for a party to navigate a dungeon.  Say your party of demihumans has decided to eschew the ol' torch in favor of their undetectable infravision.  They wander down to the dungeon when a party of 6 goblins--also relying solely on their infravision--wander round the corner.  This is the best they would be able to describe the situation:


"You see several anthropomorphic figures, at least 4 or 5, maybe more.  They're  approximately 4' tall and seem to be holding longish implements."

And forget about trying to to any of the following when using only infravision:

A first level thief is allotted 8 ability levels which he or she may divyy up amongst the 9 abilities--detect and remove traps are handled as separate abilities.  Which is to say, they may choose to read languages at 1st level rather than wait until 4th level to gain that skill, but then they lose out on some other ability.

Also, they don't have to spread their abilities out over 8 separate skills, they may stack them, as long as they have at least 5 thief abilities covered.  That is, a thief could select 4 abilities at which they function as a 1st level thief, and two abilities that they operate at the 2nd level, or they could go for 4 1st levels and one 4th level ability, or some other combination.

At each level they get 5 more "levels" to add to their abilities, at least 3 separate abilities must be improved at a time.  In this way, a mid-level thief might be a master at one or two particular skills but be fairly inept in several others.  A thorough adventuring party will have several thieves in its employ, each with a different expertise.

Every three levels (i.e. 4th, 7th, 10th, etc) a thief may opt to learn one of the abilities that they do not already have under their belt. They will gain the new ability at the first level--unless they allot more levels to it--and may advance in it as normal thereafter.

Assassins operate similarly except that they start out with only 5 levels to assign to at least 3 thief abilities, and gain 3 levels thereafter until 4th level when they may learn one new thief ability and get 4 levels to spend, blah blah blah...

Thieves and assassins may apply their Int bonus to levels gained; thus a thief with Int 14 (+1 bonus) would have 8+1= 9 levels to allot at 1st level, and gain 6 more levels at 2nd level.  Likewise, dumb thieves will have fewer levels to allot to their skills.

[I change my mind on thief abilities on a near-weekly basis.  Tune in again soon.]

Variant 1: At 1st level, all players roll 2d6 and take the highest number.  If you roll doubles, you get the value of either die +1, e.g; a pair of 4s gives the roller 4+1=5 HP.  Also, fighters add 1 to their result, thus fighters have 3-8 hp.  Similarly, bookish MUs subtract 1 from their result, so they may have as low as 1 or as many as 6 hps to start.  Constitution bonus or penalty applies.

Variant 2: As above except that instead of rolling 2d6 and adding 1 to the highest roll, fighters roll 3d6 taking the highest roll.  Two of a kind still gives a +1 bonus, 3 of a kind grants a +2 bonus.  MUs and all elves roll a single six-sider to determine their hit points, though they do not subtract 1 from the roll.

Your pole arm vs. shorter weapon rule is the best treatment for this sort of thing I've seen. I hate when dagger-wielders get the jump on fauchard-forkers.

Thanks for posting it!

Hey Erin, thanks for coming over to this quiet little corner of my blog.

I've actually modified the rule a bit to prevent too much abuse of the pole arm: the short weaponed guy needs to score a hit vs. AC 7 in order to get in range. I'm considering allowing Dex adjustment to that AC 7 figure.