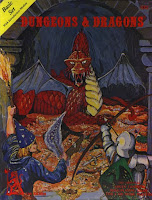 Back in the Holmes Basic Set, Clarissa the Cleric famously avenged the death of Bruno the Battler by staving in with one mighty swing of her mace the nasty giant spider that poisoned poor Bruno. This was a life-changing moment for Clarissa; her first time swinging her mace in combat met with such satisfying success.

While she got into the cleric gig out of a desire to heal, she couldn't deny the blood lust she felt on successfully crushing the horrid arachnid, and thereafter spent a great deal more of her adventuring efforts inflicting wounds rather than healing them.

When she reached 3rd level and her party was forced to decamp from their Basic D&D surroundings, she got her first look at the Players Handbook; her eyes lit up when they landed on the paladin write-up. The potential of healing powers combined with capacity for bloodshed were just what she craved. However, she lacked the charisma and strength requirements. In order to prove her worthiness, she underwent a rigorous training program meeting with motivational speakers, physical trainers, faith healers and witch doctors to achieve the necessary requirements for the paladin class. Finally, her DM relented, allowing her to switch her Cha with her Wis and, in a holdover from Basic D&D, lowering her Int to raise her Str, she finally reached the minimum ability scores required, and off she went smashing heads and healing wounds.

Occasionally Clarissa let her zeal for bloodshed get the best of her and was reprimanded by the alignment police. She was issued a citation after one particularly ruthless assault on a gang of three poorly armed bandits who made the mistake of attempting to rob her. Her claim of self defense was ignored when the Video Assisted Referee showed that the last of the outlaws had dropped his weapon and was clearly in the act of surrender when her mace crushed his face.

Chagrined by her actions--or more specifically, at being held accountable for them--she quit the paladinhood and considered changing class again. She was no longer interested in healing people at all so she revisited the PHB and petitioned her Dungeon Master for another change; she wanted to be a chaotic neutral elf fighter/magic user. The DM as initially shocked at the race-change, but on reflection, was relieved that their would no longer be a need to police Clarissa's actions so strictly, and so approved the unorthodox alteration. She moved her 17 Cha to Int and adventured on until she reached her racially determined level limits, bought a townhouse in Gryrax, and retired. Though her alignment, class, and even her race changed periodically throughout her career, one  thing was always constant: her precious, spider-crushing mace.
Posted by Timrod at 3:52 PM

Points for referring to her by her original name, "Clarissa the Cleric". Those who were there know she didn't make Priestess until after killing the overgrown arachnid.

Mostly I just prefer the alliteration.

Daniel Wagner (co-author of the Manual of Aurania) referred to Holmes himself as "Eric the Cleric", apparently based on a character he ran at Aero Hobbies.