So the new guy in my group--who's also new to D&D (we're playing a mishmash of AD&D, Castles & Crusades and a bunch of house rules mostly poached from folks like you)--has been asking a lot of questions and poking a bit of fun at many of the oddities of the game that have, over the years, become invisible to me.  One topic he's getting mileage out of is all those parenthetical spell categories that are listed next to spell names in the Players Handbook, 1978 ed. (PHB).

Having long ignored these spell categories, the pejoratives of my new player have actually inspired me to go through the entire spell list for each class--clerics, druids, magic-users and illusionists--and count each occurrence of the 10 or so spell types (cue soundtrack).   Bear in mind that no explanation of the significance of these terms was given in the text of the PHB that I've found and, clearly, none is needed to play the game.  But, for my own sanity, I had to create some sense out of this stuff, and what follows is a summary of my analysis.  Any definitions or suggested re-categorizations provided are based on my own halfhearted research and should not be assumed to be sanctioned by any person or body affiliated with AD&D in any official capacity.

So these are the 10 existing spell categories as classified in the PHB.  As you've probably guessed, I'm not entirely satisfied with it.  In particular, Alterations are needlessly bloated covering a wide variety of spells that are not at all related, including many spells which are clearly evocations but that have been classified as Alterations solely to satisfy the unstated rule that Illusionists cannot cast Evocations.  I propose 2 Alteration subcategories:

We also need a couple of new categories to cover those spells that involve moving people around instantaneously, screwing with time, and those that allow the spellcaster to exert control over some object or non-sentient force; enchantments for the inanimate, if you will.  So here, I propose two new classifications:
Which concludes  this exercise in spell nomenclature and categorization.  In summary, I've ditched 2 one-spell categories, divided Alterations into two sub-categories, determined that Conjurations are mechanically more similar to Evocations than they are to Summonings, uncovered some Evocation obfuscation regarding Illusionist spells, and added 2 brand new categories.  That's enough tinkering for one day, eh?

Now I know you're thinking, "Wow, this entirely objective, practical, non-tedious post is going to radically alter not only the way I play, but also the way I live life for the rest of eternity!  Thanks Dice-chucker."  So let me just say, you're welcome.

Posted by Timrod at 2:30 PM 7 comments: Links to this post 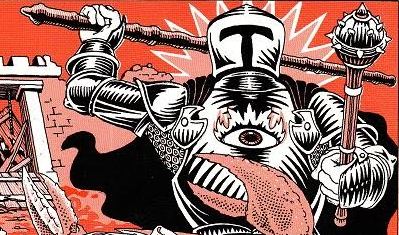 I just finished reading the extensive comments section of The Underdark Gazette post re: T1 Village of Hommlet--you know,  the one where Scottsz of Cold Text Files fame went to town on T1 and its younger sibling, T1-4 Union of the Snake.  Inspired as always by Scottsz's obssessively thorough scholarship, I dug out my ancient, rusty-stapled copy of T1 and gave it a gander.  The following is based solely on The Village of Hommlet published in 1979, not the 1985 Temple of Elemental Evil, which I am not familiar with.  Or at least I wasn't before I read Scottsz's diatribe.

Anyway, there I was reading along when there, on the final page, we get our first glimpse of Lareth.  I gather that he went on to greater infamy in the expanded Temple module published in 1985, but in the original, he was basically the scout leader of an organized troop of thugs who live under the moathouse outside of town.  A 5th level cleric with mostly bitchin' stats, Lareth is described variously as "the New Master," "The Beautiful," "well endowed" [yes, it says that] and "the dark hope of chaotic evil."  Did I mention that his stats are pretty awesome?  Have a look for yourself:


I got to thinking; Cleric shmeric, with such awesome stats this dude would make a great paladin.  Check it out:  He's got the royal flush at Str, Dex, and Con; any fighter's wet dream.  And he's loaded with charisma, great for clerics trying to impress upon the devoted, but absolutely essential to Paladins.  In fact an 18 just barely clears the bar; 17, as you'll recall was the minimum.  Wisdom, of course, is essential to both clerics and paladins.  The big outlier--Intelligence--is conspicuous not just for being so much lower than the rest of Lareth's inflated ability scores but for being exactly as low as it is: 9 just happens to be the minimum Intelligence for Paladins.  Was it Gygax's intent to model Lareth after the paladin class?  The evidence is scant at this point, but the seed was planted.

Now consider what Lareth is up to in the Hommlet vicinity: according to the text, he's recruiting "men and humanoid fighters to gather loot and restore the Temple to its former glory."  So he's creating an army of mercenaries, not converting true believers.  This sounds like a great job for an accomplished, charismatic--if not particularly bright--fighter; especially one who is as devoted to the cause as a paladin would be.  A slightly dim cleric sent to live in a hole in the ground under a swamp alongside 20-odd unwashed bandits, however, does not sound like someone on the fast-track to the top of a temple hierarchy.

But here's the clincher: a sentence from the "Notes for the Dungeon Master" on page 3 where EGG explains that the module was developed to integrate new players into his existing Greyhawk campaign: "Many of the NPCs in the module are the characters and henchmen developed through play."  Elmo, Otis, and who knows how many others are more than likely based on the characters created by players from EGG's home game.  Could Lareth also be a legacy of that campaign?

Now let's go back and pick the scab that is Lareth's low-ish Intelligence again.  If you were a player and were handed Lareth's ability scores and had the freedom to arrange them as you saw fit--as was prevalent in AD&D--wouldn't you choose to put the 9 on Intelligence too?  Normally the 3 dump stats for fighter-types were intelligence, wisdom and charisma.  Paladins of course have high pre-requisites in the Wisdom (13) and Charisma (17) categories, so they're out.  The only places an AD&D paladin can stash such a low ability score is intelligence, dexterity or constitution. No one wants a slow-ish or feeble-ish paladin, but a dumb-ish one, big whoop. So you fore-go a few extra languages in favor of missile and AC adjustments and a decent hit point bonus; anyone would have done this in a heartbeat.

Now you're saying, "You said it yourself Caveman, Intelligence is useless in AD&D, so what's the big deal if Lareth is a lightweight in the brain-pan?" The big deal is that Int is useless to PCs.  They get to decide how smart to play their character regardless of the number on their character sheet.  As long as your PC isn't utterly feebleminded, no DM is ever going to say "Dude, your character isn't smart enough to come up with that plan."  But Lareth is an NPC in a module, so his Int becomes a guideline for how the DM is going to run this guy.  Also, NPCs are not limited by dice rolls; if the DM wants to give Lareth a 9 Intelligence, he can do it just as easily as he can give him a 15 or a 6 or a 12-5/8.  So a 9 Int that, on a PC, would be slightly less prominent than a freckle on a werewolf's ass,  stands out like a sore thumb on an NPC.  Especially one such as Lareth, who has been described as "cunning."

Still not convinced?  How about this: there are two light warhorses and a lance in the store room of Lareth's hideout. Whose lance is it?  One of Lareth's men-at-arms, possibly.  But these dudes are brigands not knights.  So why, considering that there's no way a lance and warhorse are going to see any action in the cramped confines of the dungeon, would Gygax add such a throw-away item to the dungeon stores?   Maybe because it's Lareth's lance from his paladin days, left here as a hint to his past and a sly nod to the players of his original game.  EGG was quite prone to less subtle shout outs to his cronies, so why not?

Now look at Lareth in this light: he's a character statted-up like a PC paladin who's doing the job of a soldier to benefit a temple hierarchy and he has a warhorse and lance on hand.  Alignment aside, this sounds like the definition of a paladin.  Too bad this particular temple espouses evil-most-foul; no paladins allowed.  But, in concocting T1, Gygax wants Lareth to retain not just bad-assedness as a tough guy but also his divine aspect as a servant to a greater force.  So he turns Lareth into a cleric; clerics are 2nd only to fighters in combat competence and armaments and up the ante with spell power.  Decked out in magic plate mail and a bitchin' staff of striking--one of the most potent melee weapons available to a cleric--Lareth is a pretty devastating opponent for a bunch of 1st level characters to handle head on.  Even more so than a paladin might be.

Or, more interestingly,  perhaps Lareth the True was corrupted to the dark side in that original campaign.  Hear me out: we are informed that "Whomever harms Lareth had better not brag of it in the presence of one who will inform the Demoness Lolth!" 'Cuz a 10th level assassin will be sent to kill your ass!  Isn't that a somewhat extreme reaction for a potent demon to the loss of a capricious mid-level cleric of tepid intellect?  Does it sound more like the reaction of a demon who just lost something of personal value?  Like maybe a buff, young, "well endowed" boy toy?  Gygax seemed to pride himself on his openness to prurient themes in the game; is it not entirely conceivable that during that original campaign, on meeting the Demoness, Lareth succumbed to her feminine wiles, casting aside his vows in favor of the indulgent life of the darkside?  And once there, he became a favorite plaything of the Demoness?   I'm just sayin'...
Posted by Timrod at 12:03 PM 9 comments: Links to this post

Cthulhu News: The Whisperer in Darkness

Have all the recent historic and unprecedented Vermont floods been a publicity stunt for the recent Lovecraft flick?

EDIT: Oh man, that was supposed to say precedented.  Grumble.

Posted by Timrod at 8:59 AM No comments: Links to this post

Ongoing updates from my Lendore dissertation.
Posted by Timrod at 2:37 PM No comments: Links to this post