Following Hill Canton's lead, and borrowing The Dungeon Dozen's format, here's a list of highly unlikely projects that I am endeavoring to complete in 2014 ... along with a consolation project that's just maybe a bit more likely to happen.

So my kid recently brought home a Beatrix Potter book called The Tale of Mrs. Tittlemouse from his school library.  This book is remarkable for a few reasons, one being that this particular copy has apparently occupied the shelves of his elementary school library since at least 1971--it's rare to find books there that have been on the shelves since the late 90s, much less the early 70s.  However, another aspect of this book is even more noteworthy to me and perhaps some readers of this here blog: the story is a near-exact blueprint of the first chapter of J.R.R. Tolkien's The Hobbit. 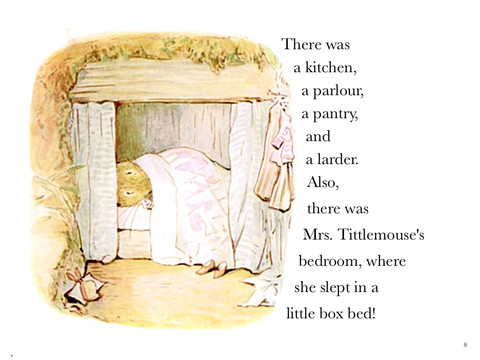 It's the tale of a woodmouse--the titular Mrs. T--who finds numerous uninvited guests mucking up her tidy home in a hole under a hedge.  The interlopers--mostly bugs of various sorts, though also a bloated, inconsiderate frog--make all manner of ruckus, demanding food and/or shelter and leaving footprints all over her well-kept home.  Eventually she expurgates them all and spends an entire fortnight cleaning and securing her domicile against future invasion.  Once she's accomplished this feat she throws a party for her other mouse friends, which the frog attempts to crash with only partial success.

The comparison with Thorin and company is obvious, but it's really the description of the house itself that is most evocative of Bilbo's home, describing the tidiness and vast number and purpose of rooms littered throughout the subterranean passages.  Significantly, her home is described as sandy, something which Bilbo's hole full of larders and parlours and pantries was described as most certainly not being.  Also, her description of the spider seems like it might have had an influence on the malevolent rendering arachnids received in Tolkien's work.

The book was published 27 years prior to the publication of The Hobbit.  Seeing as Tolkien fathered several children in the intervening years, and since this was probably the only children's book available in England back then--besides the other 400 books in Potter's catalog; apparently she was the Dr. Seuss of the pre-war era--it seems entirely unlikely that Tolkien was not intimately familiar with this story.  Maybe the academics have already chewed this connection to pieces, but if not, here's a freebie to any student of 20th Century British Literature looking for a thesis topic.  You can thank me in cash or money order.
Posted by Timrod at 3:05 PM 4 comments:

As some of you may recall, I fraudulently hit the 300 post mark a few weeks back thanks to blogspost.com's practice of counting as-yet-unpublished drafts towards your total.  It took me a while, but I've finally managed to whittle down my bloated library of unposted drafts so that I now only have 200 posts!*  If I keep at this, this whole blog will have ceased to exist by the time the puck drops for the Winter Olympics.

* For those keeping score, this is actually my 172nd published post.
Posted by Timrod at 10:07 PM 1 comment:

WARNING: This post has jack-squat to do with D&D.

Are you in the Christmas swing but you don't want all the treacle that usually comes with Christmas entertainment fare?  Or perhaps all the Yuletide flicks have vacated the shelves of your local Blockbuster? More importantly, why do you still have a Blockbuster card?  Don't you know that the last store shutdown during the Taft administration?

Anyway, next time you settle in for a wintry night's entertainment, try one of these Caveman's Classic not-really-Christmas Movies out for size.  None of these movies is really about Christmas; in fact, you may've seen 'em all and never noticed that they take place during the Season of Greetings at all.

First Blood (1982)--I must've seen this one 23 times before it dawned on me that there were Christmas decorations up in the police station--can they do that anymore?  Also, before he went all dicklord on John Rambo,  Sheriff Dennehy was running around town wishing everyone a Merry Christmas.
Three Days of the Condor (1975)--Again with the Christmas decorations, and I vaguely recall that, before she crossed paths with Robert Redford, Faye Dunaway was supposed to be heading off to Vermont to spend Christmas with her dude.
French Connection (1971)--Gene Hackman explores the darker side of the Yuletide by going undercover as Santa Claus.  Also: if anyone knows of a better car/subway chase than this one please clue me in.
The Conversation (1974)--Hackman and Fredo Corleone* spy on Shirley Feeney while Christmas carols play in the background.  Later, Hackman goes to a Christmas Party with Terry Garr.  Han Solo also makes an appearance in this one.
On Her Majesty's Secret Service (1969)--Yes, even Bond almost got into the Christmas Spirit once.  This was the first Bond flick to acknowledge the snowier climes--notably, it took Lazenby to get us there; was it in Connery's contract that he would only film in the Caribbean?  Anyway, the ladies up at Blofeld's mountaintop allergy treatment clinic decorate a Christmas tree at one point.
Batman Returns (1992)--My wife insists that the second Batman installment of the Michael Keaton era took place at Christmas time.  It did feature the antarctic-themed villainry of Danny DeVito's Penguin so it seems appropriate that a wintry Gotham City serve as backdrop.

* Here's some Imdb wisdom for you: John Cazale, who played Fredo in Godfather I & II, only appeared in 5 movies; Dog Day Afternoon and The Deer Hunter completing the quintet.  All 5 were nominated for best picture Oscars.  Dude was batting a thousand before his untimely demise at age 42.
Posted by Timrod at 12:00 AM 3 comments: