So I was looking through the Monster Manual the other day playing a game of DCS or DAT (pronounced "dis or dat") wherein I look at all the illustrations in the MM and guess whether each was drawn by Dave Sutherland (DCS) or Dave Trampier (DAT).  Anyone familiar with the artists in question probably knows that this is not a particularly difficult task.  [The works of DCS and Tom Wham--who also has a number of illustrations in the MM--on the other hand, are actually much harder to discern.]

You play this game a few times and you begin to pick up a few traits of each of the artists. Trampier hands, for instance, have long fingers and prominent metacarpals, while DCS, well, is no Tramp.

One distinctive feature of Sutherland's work is that he often drew the far leg of people and critters in silhouette.  See the troll on the left below for an idea of what I'm talking about: 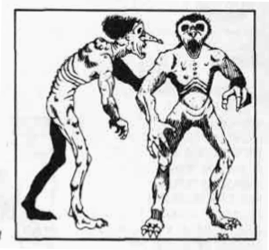 Indeed, while DCS does this all the freakin' time, Tramp--the master of fine hatching--never uses this technique.  Nor does--to the best of my knowledge--Tom Wham.  From Baluchitherium through Yeti, if you see a leg, wing, arm, or other extremity filled in completely in black ink, it might as well have "Sutherland" written across it in flaming letters.  Check out everyone's favorite pig-faced orc, below; he gets the silhouette treatment over the entire right side of his body:

But right there on the facing page of the orc you'll see Jean Wells' Otyugh illustration featuring a fully blackened rear leg as well as a mostly blackened hind tentacle.

Now I know with absolute certainty that this is a Jean Wells drawing because none of her illos appeared in the earliest printings of the MM, and the copy I had as a kid was, apparently, one of those early printings, cuz whenever I see the violet fungi or the giant rat or that bellicose otyugh I'm still taken aback by these newcomers.  Fortunately for the DCS Black Leg Theory, a not-too-close inspection quickly reveals that the femur sticking out of the muck-pile is signed "Jean & Dave" so, presumably, DCS had a hand in this after all.

Good spot. I hadn't noticed this as one of DCS's artistic signatures. There are a few of these in Holmes Basic - the left "black arm" of the Foreward lizardman, and a "black leg" on the warrior fighting the hydra.

Yeah... DCS prob used it as a shortcut. DAT uses white space very creatively, but also uses blacked out bits and has in fact a very decent grasp of contrast. Also DCS seems ill at ease with backgrounds as a whole.