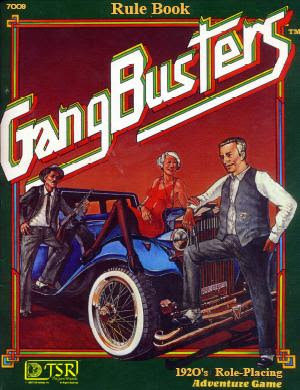 Over the weekend I had the unique pleasure of suffering from a pretty severe fever that had me strapped to the couch for most of the day, ignoring my wife and child as they went about the business of life. What I did instead was wallow in fever flashbacks to other great fevers I've had in the past. The most notable one was, without question, the Great Fever of Winter '84 of which many a bard has struck a tune in the ensuing years.

At the time, I was a freshman in high school, and a friend had left his copy of Gangbusters at my house so that my brother and I could read it and we could start playing. We had all gotten new rpgs for christmas that year--I got Star Fronteirs, my neighbor got Gamma World (which we found ridiculous), this friend was Gangbusters and someone else, I can't remember who, received Top Secret. Yes, all TSR products. The selection was pretty limited at the drugstore in our town that was also our sole source of comic books, video rentals, and after-school candy. Such is life in a northern town. Ah hey ma ma...

Anyway, I rember lying about reading the Gangbusters rule book whilst suffering this great fever and being most impressed with its combat system. Shotgun blasts and machine gun bursts were intriguing--and I credit these rules for finally distinguishing, for me, the difference between a rifle and a shotgun. We went on to play a lot of pitched shootouts, inevitably involving a car chase; G-men and gangsters alike firing away from the running boards of their Packards and Studebakers.

While the milieu failed to capture our imaginations--robbing banks and bootlegging served merely as an excuse to funnel our adolescent bloodlust--the combat seeemd fast, furious and fun. And for that reason, I pretty much cribbed it intact for my Red Dawn/Road Warrior inspired Post apocalypitic rpg that I developed later that summer.

Now, 26 years later, Gangbusters doesn't crop up much in old school discussions that I've seen, and I suspect that others quickly tired of the lack of fecundity of the gangbuster premise--if they paid it any heed at all--just as we did. But I'd love to find the old rules and see if the combat system was really as frenetic as it seems in my memory. Or maybe it's just the fever talking.
Posted by Timrod at 2:47 PM 1 comment:

Some time ago on a far more interesting blog than this one there was some discussion about DM's rolling in public vs. fudging the dice, and while I don't really give a shit either way, one of the things that came out of this was the difference between primary dice rolls--like combat--and secondary rolls--like random encounters. To summarize, it was generally accepted that, while fudging primary rolls is verboten unless small children are involved, a little secondary fudge probably makes sense from time to time. Though there were, of course, some who felt that even this sort of leniency is a sure sign of the impending apocalypse.

Anyway, all this discussion reminded me of a situation that arose once back in my Old Time gaming days. My brother's ridiculously over-powered 10th level Cavalier was "clearing the lands" for his new stronghold and I was the DM for the event. I was 15 at the time and my brother was 18, I believe. I was halfheartedly rolling random encounters straight out of the DM's Guide and watching as my brother's cavalier ploughed through the Monster Manual like a hungry gamer through a plate of nachos.

It was a tedious affair and I really just wanted it to end when I rolled an encounter with a 9th level fighter. You might think "this could be a good fight" but this was shortly before Unearthed Arcana came out so only Cavaliers (the Dragon mag version) had weapon specializations. For those unfamiliar, this was a he-youuuuuu-ja advantage that allowed the cavalier something like 16 attacks per round at +32 to hit and damage with 9 different weapons at once. I exaggerate, of course, but I do remember that if my bother's cavalier was limited to inflicting a mere 20 points of damage in a single round it was considered a victory for the other side. Thirty to forty pts of damage were more the norm.

Anyway, I decided that this dude was clearing these very same lands for his own stronghold and thus a fight to the death was in order. So I rolled up a character and did some serious "secondary" fudging to determine his abilities and magic items. The result was a guy with 110 h.p., a vorpal sword, a +5 suit of platemail of etherealness, and a +3 shield. Even with his ridiculous hit points and armaments I knew this guy wouldn't last more than 4 rounds against my brother's munchkin-ass cavalier.

Ultimately, I was right. A few rounds into it the fighter pulled the rip cord on his armor and vacated the material plane. But not before staining my fingers in a fresh batch of rich and chocolaty primary fudge: on his first attack the unnamed fighter rolled a natural friggin' 20 with his vorpal sword. By all rights, the cavalier had just been handed his head, literally.

Now, my brother and I did not fight often and we generally got along pretty well. But I knew that if I let the chips fall where the dice said they had, the cavalier was not the only one who would be carrying his head around in a basket. Even if he didn't actually assault me physically I would have had to endure a Gestapo-like interrogation that I just didn't have the will to sustain. He would have questioned every decision and dice roll that led up to his headless horseman, and I am not to this day a very good liar in the heat of battle, so I would have folded and admitted that the vorpal blade was a fudger. I would have had to press reset, roll a new sword, and start all over. Except this time there would be a big, stinky cloud of resentment fogging the air around us. So I pretended it was a 19 and rolled normal damage.
Posted by Timrod at 11:32 PM 1 comment: