Hopping on the ol' starting equipment bandwagon kicked off by Zenopolis Archives the other day, I decided to toss my two cents on the heap.

My preference is for something along the lines of this from the always excellent Built by Gods Long Forgotten.  Basically, you roll 3d6 for your stuff, but rather than adding up the total to determine your net worth in coinage, you use the value of each die to determine how many items from each of 3 or 4 categories of value ranging from the prosaic--torches and sacks--to the nifty--gilded chainmail  interlaced with gemstones and an integral heart rate monitor with digital readout.

What I like least about BGLB's approach is that it's too easy to use; so easy that someone might actually be tempted to use it in their game.  So I'm taking the same premise but developing a more convoluted approach that will make it less user-friendly.

So here's how it works:

It should be noted that I haven't gotten around to making a "gear list," so stop looking for one.

Once an MU has assigned dice to the Spell column, he or she then rolls a d6 on the Spell List table below and consults the appropriate column to determine which spell he gets. For example:


Thrombo the Thaumaturge rolls a 5, two 3s, and a 1 for his starting equipment.  After burning the 1 on the obligatory staff, he decides to fore go any other gear and assigns his remaining dice to the spell column, which will net him 3 total spells. The 5 earns him a roll on the B list, the 3s earn him two rolls on the D list. He rolls a 1 and a 6 on the D list: Comp. Languages and a free choice: he selects Detect Magic. For the B list he rolls a 4: Light--really? Light made the B list? Who's responsible for this crummy list?

Here's what I'm contemplating for my new, improved* parrying rules. If a player wants to parry an attacker's blow, the defender must follow the ensuing procedure:

Step 1: Declare his intent to parry after an attacker has successfully rolled to hit--there's nothing more shameful than a premature parry--but before the ensuing damage die is rolled.  Once the die is cast, it is loo late for action.  Parrying takes quick wits.

Step 2: Once the intent to parry has been successfully declared, the parrier** must achieve a higher result on a d20 roll than the attacker rolled, adding combat level and other to-hit bonuses.  If the attacker rolled a natch 20 then put your dice away, the blow cannot be parried.

Step 2 Option B:  For those preferring the extra-convoluted approach, the defender can roll as if trying to score a hit using the attacker's weapon speed factor as AC.

Step 3: If the defender rolls successfully, he or she then rolls damage as if they had hit their opponent.  This is the total amount of damage the defender has deferred from their person.

Step 4: The attacker rolls damage.  If the damage roll is equal to or less than that rolled by the defender in Step 3, the defender receives no damage from the assault.  Any damage in excess of the defenders damage roll, however, is applied to the defender's person.  Thus, a dagger-wielder is not likely to successfully stave off the entirety of a bardiche attack. 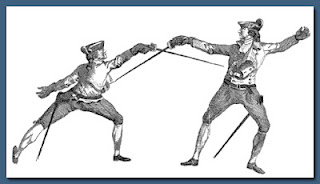 Exceptional Rolls:
20--Roll a nat'l 20 and all damage is blocked.  Other possible results of a criterical hit might  include: riposte--an immediate attack against the opponent; roll to hit as normal. Prise de fer--the attacker is disarmed.

1--The attempt to parry fails and no damage is blocked.  Additionally, a despicable die roll might result in the parry attempt leaving the defender in an awkward position allowing the attacker a second, immediate attack; the defender may find himself suddenly bereft of weaponry; and, indeed, his or her weapon might be decimated in the attempt to stymie the assault.

Depending on which option you use, either the combination of skill and luck of the attacker or the swiftness of his weapon determines how hard a particular blow will be to parry.  The heft of your weapon is a significant factor in determining how effectively you will parry.  Parrying results in diminished offensive opportunity and a fairly decent likelihood of disarmament or worse.

*Regular readers of this blog will understand that "improved" in Caveman-speak generally means "Now more convoluted!"