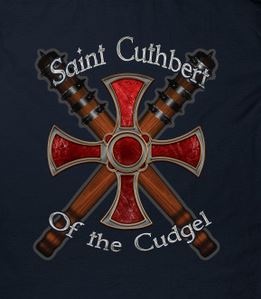 I missed St. Cuthbert's beer-drenched festivities back in March but, thanks to the Episcopal Church in the States, we get to celebrate his saintliness on August 31st as well (and again on Sept 4 in Wales). So here we are doffing our chapeaus to the Cudgelly One as summer slips into its inevitable tailspin.

In searching for a graphic to spice up the ol' post, I found this cool image from a t-shirt produced by Teepublic (go by one). What makes it extra-cool is that they've superimposed over a pair of iron-clad cudgels--in deference to Greyhawk Cuddy's well-known affinity--the stylized cross ascribed to real-world St. Cuthbert.
Posted by Timrod at 1:16 AM 1 comment:

[This essay was written ages ago but deemed unworthy of publication by the DiceChucker editorial Board. Given the lack of content lately, they've relaxed their standards significantly. It's essentially a summary of the Hommlet campaign that has inspired much of the fodder for this blog in the years since. -- D. Chuck]

Back in the winter of 2012, I was hard at work on a semi-home re-brewed T1-4 which I christened TR 1-5 Against the Cult of Superlative Evil (I don't remember why it was "TR" instead of just "T", just roll with it) wherein I was using existing--though heavily re-worked--Gygax penned modules to complete the T series.  Using as starting point a relatively intact V. of H., it was going to diverge into a wholly different experience from there.  A quick synopsis of how I planned out the campaign:
I never sourced an existing module to rip off for TR5, but it didn't matter because what actually happened was this:
None of my backstory machinations really came into play--at least not the way that I had originally planned.  Every time I had a cool explanation for something that would lead the gang into the clutches of my malevolent plot, the players ignored them and went somewhere else.  Every time I left a clue, the PCs passed it over--or even willfully destroyed it--without ever noticing it's significance.  And it was pretty sweet.
Posted by Timrod at 3:29 PM 3 comments: