A few years ago my delightful progeny's elementary school gave him the whole week of Thanksgiving off rather than just the 4-day weekend that the holiday is typically honored with so we ditched Mama--she had a "Big Project" at work--and flew across the country to spend the week with a pile of family members.

Of course, none of them had the whole week off so, for three days while my brother and sister and their families were off to work/school, me and the little dude had several hours to kill. We hopped in leaf-piles of every species and played pumpkin soccer until the neighborhood was a gorey orange mess. Then we headed inside to slurp hot cocoa laced with molten marshmallows while plundering my sister's stash of board games.

First thing we did was:
Now if neither of us had Miss Scarlet she might still be lounging in any one of the rooms. Possibly even the lounge.

While adding the necessary uncertainty that the two-player game lacked, this step also made exploration of the entire board a very significant part of the game; now you have to visit each of the rooms in order to eliminate all possible solutions. It might be more fun to play this way regardless of how many players are at the table.

Just for the heck of it we also made this new rule:
At first, if they caught you you had to go back to your starting position, but then we decided on another convention:
'Cuz if you're having to dodge zombies while looking for clues, it helps if you're armed.

But ranged weapons are an even huger benefit:

Why five? Becuz someone already put one into John Boddy earlier in the evening. Did you forget that you're still playing Clue?

What to do with the rope:

And the candlestick is essential to quick navigation of the secret passages because: 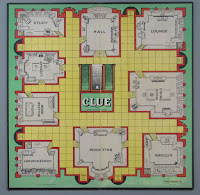 Since fighting and evading zombies was turning out to be more fun than solving the murder, we pillaged other sources for game pieces to be used as zombies and other monsters that could breathe fire or teleport or fly... Good old fashioned Clue had serendipitously morphed into D&D: The Board Game. Not to be confused with the  D&D version of Clue.