N1:Sinister Secret of the Reptile God 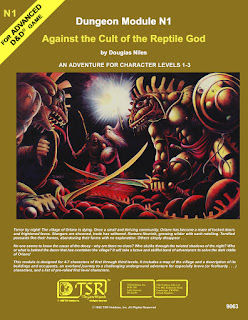 Anyone who's followed this blog with any regularity has probably already determined that it's about time I started ranting about a new (old) module. The more obsessive devotees amongst you have probably further determined that the next object of my modular obsession is 94.8% likely to be N1 Against the Reptile God by Douglas Niles. And you'd be correct, cuz this bad boy has all the key elements of a module I love: a prominent town encounter, published before 1984, and... well, who needs more than that?

Furthermore, you've most likely heard several of my countless retellings of the apocryphal anecdote--at least I assume it's apocryphal since I made it up--on the link between this module and U1 Sinister Secret of Salt Lake. The way I tell it, back in '81 the Honchos at TSR tasked 2 groups to come up with a town-centric module to be entitled Sinister Secret of Saltmarsh; whoever turned in their draft first would get it published. The UK team won the race--significantly, they left out the town component in their haste to cross the finish line--and thus walked away with the title, literally.

Thankfully, the Lake Geneva braintrust saw the merit in Mr. Niles belated submittal and decided to publish it as well, though with the less inspired title Against the Cult of the Reptile God. As consolation, N1 got cover art from the under-utilised Timothy Truman.

Despite this fabricated association with U1, I can't help but look at this module as a reinterpretation of the venerable T1 Hamlet of Villoge, a module which has been canonized on this very blog. Both modules involve evil cults infiltrating a small town as well as some nefarious doings in a nearby swamp. The prime difference between the two settings being how their respective evil cults manifest. While in T1 the cult is fairly inert within the Village--there are a few spies gathering info but to no known purpose other than protecting the secrecy of the cult--in N1 the cult has a clear cut agenda: forcibly recruit new "members" and collect "donations" to the cause. Likewise, the transformation of agrarian, druidic Hommlet via the influx of Cuthbert-worshipping tradesmen is brought to much more baleful focus in N1's village of Orlanes where the crop-goddess worshiping natives are being invasively transformed into malevolent, reptile-worshiping cultists.

One of the prevalent symptoms of conversion to the cult--besides disappearing for a fortnight and, upon your return, pretending that you never left and never mind that you used to have a wife and a few more kids, what are you getting at?--is that new cult members are typically no longer any good at their professions. Farmers who once ran tidy, prosperous farms now disinterestedly toil in overgrown fields while their barns and chicken coops fall into a state of decrepitude; the carpenter's inept handiwork is a mockery of his former artistry, etc. There are exceptions: the blacksmith is still able to skillfully work his forge, but he's a man deranged now; his temper so violent that the primary occupation of his grown sons is restraining him from sodomizing everyone who wanders onto his yard. Even so, there are red herrings here; some of the tradesmen in town who preside over dilapidated establishments are just inherently ill-kempt people who've yet to visit the swamp lair of the eponymous reptile god.

Which brings us to what might be the one weak spot of the module. While it's obvious that Senor Niles was going for an Invasion of the Bodysnatchers vibe here, it seems that he scoured the Monster Manuel for some appropriate being to induce the pod personae and settled on the Spirit naga. Not inherently a bad idea--especially when the naga has such a deliciously descriptive name as "Explictica Defilus"--except that this is supposed to be an intro dungeon for n00b PCs. The naga, coupled with the prevalence of troglodytes in the lair (2 HD, 3 attacks/round, revulsion odor causes weakness, chameleon like powers) are tough customers for a 1st level party. Unless your DM is a big ol' softy, you're gonna suffer serous casualties. But given the trust no one vibe of this module--and the post-golden age pub date--the village is not going to be the recruiting ground for reinforcements/replacement characters in the way Hommlet or Restenford are. Even the two characters who seem like they could be the most useful--a pair of elves hired by the mayor to investigate the goings-on in town--are prohibited by Module-Writer's Fiat from assisting the PCs.

Instead, to balance the naga's power, there's an old man named Ramne hangin' out in town who happens to be a 7th level MU and exists solely for the purpose of helping the par-tee. Not only will he put his arcane spell-power to use for them but he also offers up the services of his weasel familiar which can automatically lead the investigation to the cult's lair in the swamp. Although the author admonishes the DM to not let this become a case of Ramne and the Seven Dwarves, it seems like there coulda' been a better way.

Like maybe do away with the naga--and not just because it's too powerful for a first level party. The naga also doesn't fit the bill very well because its power is a permanent charm, not a soul-sucking mind controlling force. It's just too codified and bland for the creepiness that the cult emanates in Orlane. There's nothing about a charm, as defined in AD&D, that would cause the "converted" to lose interest in maintaining their farms, drive them to desecrate the holy texts of the divine being that they've dedicated their lives to worshiping, or several of the other things that happen in the module. I'm not criticizing the author for taking license with the charm, rather, I wish he'd taken it several steps further. Call the thing a "curse" rather than a charm and have some sort of customized creature or artifact doling out the madness from the marsh. Instead, we get a statted-out critter from the Monster Manny that every AD&D player worth his or her salt has already committed to memory. After the creepiness of the village, the dungeon really needs a special, heretofore unkown horror at the root of all this evil.

Furthermore, the purpose of the cult is basically the same prosaic objective of every other cult in the history of cultiness: to take money from the blindly devoted. But since a side effect of the charm seems to be that the afflicted tend to lose interest in maintaining their previous livelihood, once you've been ensnared by the cult you're not really worth much as a source of funds anymore. So in order to make your monthly contribution you have to go out and recruit more cultists. Can you spell Pyramid Scheme? And there you have it: Explictica Defilus is nothing more than an Amway sales rep.