Hommlet: Heart of a Village

One of the coolest things about The Village of Hommlet is that it is not just a static village setting designed solely as a medium for PC activity.  There are things going on here--big things that may have little or no bearing on the actions of the PCs.  Things that are too big for your puny PCs to affect or too subtle for them to notice.

Obviously, there's the rise of the nefarious Temple of Elemental Evil.  But what about the concurrent rise of the Church of St. Cuthbert, as members of both cults infiltrate the village, each in their own fashion.  The Cuthbertines are generally lawful good artisans and craftspeople and seem intent on becoming a part of the growing community.  The Temple members are evil and secretive and presumably are trying to return to the era of oppression that precipitated the warfare of a decade ago. We don't know which of the two groups the Druidic natives of Hommlet find more objectionable.   Though the Cuthbertines are not outwardly malevolent, tight-knit, homogenous populations are, historically, not too well disposed to large influxes of new folks with different cultural values and beliefs. 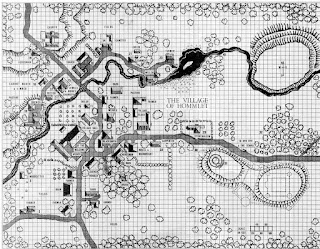 Then there's Rufus and Burne's castle under construction on the hill east of town.  Though it's not finished, the town map conveniently shows the ultimate plan of the structure, just so you know what the future has in store for Hommlet.  Is the castle a sign that Hommlet is already being subjugated to a higher power even without the Horde of Elemental Evil? How does the village elder feel about its  presence?  Glad for the safety provided?  Threatened by the assumed diminution of the traditional authority of the village?

And at the Church o' St. Cuthbert, Canoness Y'dey has "left unexpectedly and has not returned."  What sort of business is she tending to that it is accompanied by such mystery?  Terjon, the acting Canon--who would rather be off adventuring himself--believes that she is off "on a quest", but what sort of quest do churches send their Canons on?

Furthermore, Calmert--the officiant of the church--is mysteriously diverting funds from the church to the construction of the new castle across town.  This suggests that perhaps the church does not officially support the new castle or its inhabitants, even though R&B are devotees of the Chapeau.  At the least, it indicates that Calmert's loyalties are somewhat misplaced.

Many of these features are, I assume, further evidence of the palimpsestuous nature of T1.  As I may have mentioned in another post or two this module is unique in that it was created for play in Gygax's own campaign but then modified to incorporate many of the actions and characters--P- and NP- alike--from that original campaign into the final, published work.  Elmo and Lareth seem like they were probably members of that original party; likely Rufus and Burne were as well.  But was the Cuthbert Infiltration also a result of the original campaign?  Was the entire Battle of Emridy Meadows an outcome of their actions? Can I get a witness?

While T1 offers the opportunity to uncover clues to the second rising of the Temple of Elemental Evil, The death knell for Hommlet has already sounded.  Soon it will be overrun either by baleful Temple followers or the docile-yet-obtuse followers of St. Cuthbert.  Either way, Old Hommlet is dying.   Which is the one bummer about the village, one gets the sense that you've arrived at the party only to find that the keg is floating in a tub of molten ice. A new regime, as represented by St. Cuthbert's middle class followers and the imposing phallus rising on the hill east of the village, has taken over and it's only a matter of time before the Hommlites of old either assimilate or emigrate.  The battle for Hommlet's soul has already been lost regardless of what those dorks in Nulb have up their sleeve. 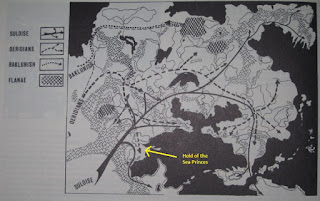 *Greyhawk enthusiasts will know that the Suel people were the sole practitioners of slavery in all of Oerik. Bastards.
Posted by Timrod at 2:34 PM No comments: