All right, I'm going to skip over levels 10-14 until such time as I can find a reason to chat about the terms Expert, Senior, Chief, Prime or Guildmaster as they apply to Assassinry.   So hold on to your dice bags kiddies 'cuz we're going straight to the top: Grandfather of Assassins.

As was mentioned previously, the word assassins was first used to describe a fanatical cult in Persia from the middle ages.  The founder of this cult was Hassan-i-Sabbah, who, by shacking up in his mountain castle, earned the title Sheik al Jebal which translates to "Prince of the mountain" or, the preferred term in this case, "Old Man of the Mountain."*  This old man was the original Grandfather of Assassins; a single person who ruled over the entire order of death bringers.  But unlike the D&D usage, though eh is responsible for numerous murders, he was not a professional killer and very likely he never killed anyone with his own hand.  Rather, he was the dude with the charisma to charm you into devoting your life to the cause, and also the dude to tell you when the cause needed you to take action and whack some mo' fo' who'd talked trash about your cult.

* Alternatively, there are sources that say that it was the leader of the Syrian branch who was referred to as the Old Man of the Mountain.

This dude is also, allegedly, the grandfather of the mystic cult phenomenon; the Crusaders, and particularly the Knights Templar, took what they learned about the Order of Assassins  back to Europe and thus was born the culty trappings we now associate with mystic groups still extant such as the Freemasons, Illuminati, Rosicrucians, and the American Institute of Architects.

For those interested in further reading, there's a novel titled Alamut written by the Slovenian author Vladimir Bartol that is based on the cult of Assassins and the treachery of Hassan-i-Sabbah.  Published in 1938, the book was translated into 18 languages and has achieved bestseller status in Spain and France, but it was not translated into English until 2004.  A few pages into it and I wish they had taken a few more years to work on that translation.  One gets the sense that the poor fellow approached the translation as if he were transcribing legal documents, not reconstructing linguistic subtleties to convey a narrative... or whatever.  The result is repetitive use of simplistic sentence structures which make for very tedious reading.  Despite its subject matter, it seems like it was written for children.  Brush up on your Spanish or French--or, better yet, your Slovenian--if you really wanna read this one.
Posted by Timrod at 2:30 PM No comments:

Seasons Greetings from the Mad Archmage

As promised in my last post on the matter, I'm bringing you the latest holiday adventure news from  The Castle of the Mad Archmage by Joseph Bloch, aka. Greyhawk Grognard.  When we left off, our intrepid adventurers had, after slaughtering most of an orc outpost, formed an uneasy alliance with the surviving members in order to take on a hobgoblin posse on the 3rd level.  Since my memory of the exact events has eroded considerably, this will be a succinct report.

Bob and I decided that having a mission--in this case, killing off hobgoblins to foster an alliance with orcs--was not what where we wanted to take this game.  So we developed an exit strategy: the orcs drew up a rough map of the adjacent terrain, led the party down to the 3rd level, and... slunk away at the first sign of trouble. But not before they slipped a shiv into Quisling's ribs.  Quisling, an orc that we charmed during our assault, survived the attack and was very thankful to the party for nursing him back to health and saving him once again--or so he believes--from the treachery of his own clan.  He's such a sincere and trusting chap.

It was at this point that Godraviel, the elfmaid who had charmed Quisling in the first place, could handle the crushing guilt no longer and revealed to him the truth of the situation.  That is, he was under a charm spell and that we had killed his former colleagues and lied to him in order to secure his assistance in defeating the rest of his clan.  She told him that she was releasing him from the spell so that he could choose his own fate.  Since he was not actually released from her spell--I decided that it is not actually within her power to do so--and since she was so sincere in her speech, the end result was to further Quisling's infatuation with the elfmaid.  We rolled up his stats and made the orc a full fledged party member.  Now we have to figure out the characteristics of the Orc character race in S&W...

In the end, we did honor our deal with the orcs by killing the 12 requisite hobgoblins, but it cost us dearly, as Brodsky the cleric was left for dead and Glebberd the Halfregnome and Polvo the dwarf--who, through their quick wits and upbeat personalities have overcome their diminutive stature and become the very heart and soul of the party--were nearly done for as well.  On our way back to the surface, we ran into the Bandits again from our first encounter, and, pointing out that
they agreed to let us pass, though they insisted, for inventory reasons, that Quisling must remain in the dungeon.  A quick sleep spell to even the forces and some tough talk from Polvo about where they can shove their dungeon rules, and the bandits agreed to let us pass, though, in order to allow them to save face, we paid 10 GPs for Quisling's liberation, and agreed to leave still-heavily-wounded Sigurd in their custody to assure our return to the dungeon.  Little do they know that everyone in our party hates Sigurd.

From here on out, I'm running the bandits not as opportunistic ruffians preying on honest adventurers but as legitimate dungeon bureaucrats in the employ of the Mad Archmage.  Responsible for such things as dungeon inventory, revenue, and customer service, they can be counted on for dungeoneering assistance to adventurers--extra torches and the like, limited dungeon intell, or even a bunk to rest the wounded in--but who also require an accounting of monsters killed and traps sprung for re-stocking purposes; and exact a tariff for anything removed from the dungeon edifice.
Posted by Timrod at 4:52 PM No comments:

So the inspiration of this here string of posts on the AD&D Assassin class level titles is finally at hand; we've reached the eponymous 9th level: Assassin. 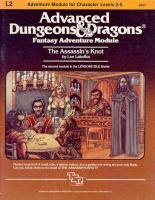 The word assassin is derived from the word Hashshashin, a term used in Syria--not the Lendore Isles as some would have you believe--to describe a fanatical sect of Islam called the Ismailis who were a small but troublesome religious/political force in the 11th-13th centuries.   Lacking a powerful army and considered heretics by the Muslim establishment of the day, the Ismailis holed up in a few castles in an isolated valley in northern Persia and dissuaded their numerically superior enemies from invading by murdering key political figures.  Though the cult was centered in the mountains of Persia, the term assassin is believed to have come about in reference to the Syrian branch of the group that the Crusaders came in contact with.  Hashshashin means "outcast" or "rabble" but also was associated with users of the psychotropic herb hashish.  And although most Assassin scholars believe that it is its meaning as a pejorative term for outcasts that originally inspired the application of the word, the western world has latched onto that hashish connection and had a blast with it ever since.

Anyway, the cult was formed by a man named Hassan-i-Sabbah, among other spellings, who took control of an impregnable castle known as Alamut, and gathered around himself a throng of devoted followers who were willing to obey his every command.  They were trained  in the fine arts of duplicity and sent out into the world to gain the trust of various persons of interest to the Assassins, usually folks with titles like Sultan, Vizier, or Imam.  Once they'd inveigled their way into the homes of these dudes as household servants, body guards, or even trusted advisers, they lived a life of faithful service to them, never betraying their origins until such day that the signal came from Alamut, at which point they would cram a dagger through their erstwhile compadre's ribs.  They often kept up their ruse for years or even decades and, depending on how things worked out, the signal might never come.  Deep cover, my friends.  Indeed, there is very early usage of the word assassin that implies not a hired killer but a person of unsurpassed devotion.

Once the devotee had done the deed, the assassin did not generally slink away into the night; no, getting caught was, more often than not, part of the job.  By submitting to capture and execution, the assassins did more than just kill the leaders of their enemies; the combination of their skill at subterfuge and complete devotion wreaked havoc on their enemies psyches as well.  A culture of paranoia spread like wildfire, and speaking out--much less taking military action--against the Assassins soon fell into disfavor.

Most of the useful information in this post is derived from the book The Assassins by Bernard Lewis, originally published in 1968 by Basic Books, Inc.  New York.  It's a somewhat scholarly tome describing the religious and political events of Islamic world during the time of the Assassins.  Also, the wikipedia entry for Hashshashin is pretty informative.
Posted by Timrod at 1:57 PM No comments:

It's been more than 2 weeks now since my last entry on the assassin level titles, and--despite the fact that at least one person has confirmed interest in this topic, thank you--there's a good reason for the delay: cutthroat and executioner.  Everyone knows what they mean, there's nothing particularly interesting about the etymology of these terms and, most importantly, every time I look for an intriguing cultural reference, I fall asleep at my keyboard.

But rather than avoid them forever--especially since I've already written up level 9--I'll lump them both down in one dose and move on with life.

Cutthroat: a race of sharp throated people.  The men of this tribe were known to hone their throats to such fineness that they used them to shave.  Or whiddle implements from wood.  Also the name of an arts journal.

Executioner: one who wears a black hood but no shirt.

Actually, this one is mildly interesting because it really just meant someone who carries out some action, much like how "executor" is used today to describe the guy who carries out your will after you go off to Valhalla.  In time it came to be primarily associated with executing a sentence of death on whatever poor sap/evil cutthroat whose head was to be relegated to the wicker basket.

On a related note, my first AD&D character was an elf named Elfrandel the Executor.  In my defense, I pronounced it "ex-uh-cuter" instead of the more traditional "egg-zek-you-ter."

I only just now found out that Executor is also the name of one of those big space ships that those dudes who got choked by Darth Vader drove around in.  And George Lucas was probably not 11 when he named them.
Posted by Timrod at 3:42 PM 3 comments: