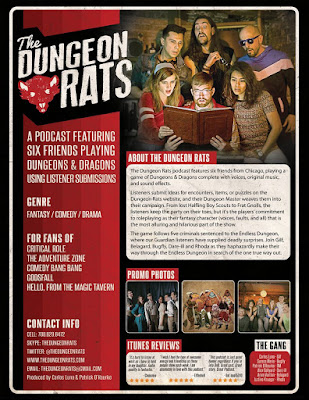 The good folks over at The Dungeon Rats asked me (and probably you as well, no?) to write up a piece on their DnD playin' podcast.* They record their gaming sessions as their posse of PCs quest through the Endless Dungeon. Highjinks, one hopes, ensue.

The Dungeon Rats are not your typical gang of sweaty, Dorito-snarfing gamers. They've got a background in improv--which one suspects will come in handy for this type of endeavor--and some pretty slick production values. They incorporate listener input into their game--oh cripes, read the press release for yourself, it's right over there on the other side of the page. Hopefully it's something along the lines of Harmonquest minus the animation.

*I usually ignore these sort of requests--I say as if they happen all the time--because I assume that someone better equipped to do them has also been solicited for the job. But it just so happens that Reader Rick was pestering me to get off my ass and do something on the same day that these folks contacted me and so, lacking any other material at hand, voila!
** That "Fungeon" bit was a typo but maybe the Dungeon Rats will ask me permission to trademark it.