Grievously absent from the blogosphere: DQ Anyone? 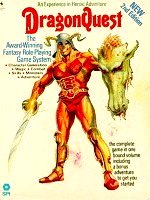 Does anyone blog about DragonQuest?  I've been beefing up my blogroll with non-D&D bloggers lately to better reflect the range of my gaming interests and, after D&D, the game I've played most is SPI's DragonQuest.  And although there are some misanthropic DQ boards and a load of pages dedicated to various people's adventure logs and house rules--like the unbelievably well done DragonQuest Frontiers--I can't seem to find anyone who, ya' know, just writes about DQ.  Sure, there's Greivous Injury, but that place seems to suffer from technical difficulties a lot lately.  Probably because they changed the spelling from the more appropriate--if technically incorrect--"grievious."  It's an unwritten rule of the game that, when playing, grievous is to be pronounced "gree-vee-us."

For those not in the know, the Grievous Injury Table was probably the most iconic feature of the game.  It was a table used to determine the effects of exceptional attacks on you and your opponents--a "critical hit" if you must.  The unpleasant effects of the grievous assault on your being were delivered with text that often sounded as though it was swiped from a deck of Community Chest cards written for a truly morbid Monopoly game:

"Tsk Tsk.  A wound of the solid viscera.  Usually fatal."

"Your aorta is severed and you are quite dead.  Rest assured your companions will do their best to console your widow(er)"

"A chest wound... your opponent's weapon is caught in your ribcage and has been wrenched from his grasp."

Anyway, if you never played, these were a few of the injuries you missed out on.
Posted by Timrod at 12:28 PM 5 comments:

Appendix NF: Avoid the flumpf, get a Dictionary of Early English

Say you're making up monsters for your new dungeon but all your monster names tend to sound like you ripped them off from the Fiend Folio.  Or maybe you're trying to infuse your campaign with atmosphere by creating your own "common" dialect which you will force your players to learn and use during play. Try dipping into the past for inspiration by incorporating long forgotten words from our own blessed language with the help of the Dictionary of Early English.  Written by Joseph T. Shipley, and published by Littlefield, Adams & Co. in 1968--though numerous tomes of its ilk exist, this just happens to be the one I own--I highly recommend it to other word nerds.

Sure you can look up the roots of old words on the internet without owning a good ol' fashioned paper n' ink book; which is definitely handy when you're researching, say, the level title of your favorite character classes.  But where texts like this beat out the internet and your kindle is in the serendipitous discoveries one unearths merely by flipping through the pages.  Say you've got time to kill while you download the latest OSR retroclone from Bloated Houserules Publishing; you grab the ol' dictionary and flip it open to page 439.  There's mordincancy, any old schooler is going to want to know if it has something to do with big creepy hands, right?  Nope, it means biting or pungent.  Then there's Rosencrantz's old buddy morgenstern; a spiked club, but, on hindsight, that seems obvious.   Then comes morglay, from Welsh Mawr, great + cleddyf, sword--whence Claymore. And finally, moria; folly.  With all due respect to the Professor, Sindarin for "Black Chasm" my ass!

Some other highlights:
Barbigerous--a most imposing beard
Gnomide--female gnome
lant--urine, another interesting tidbit: it was a common ingredient in ale; bear this in mind the next time your home-brewing buddy offers you a pint of his latest batch of double-lanted.
Paynim--the country or lands of the heathens; Greyhawk Enthusiasts will appreciate this one
Penster--a puny wielder of the pen. Hmmmm, I'm thinking of renaming my blog...

and best of all: 120 different -mancies show you how to divine the future!
Posted by Timrod at 11:34 AM 7 comments:

Lendorology: Clergy of the Big Gamble 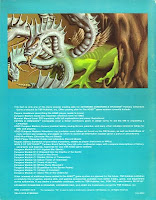 At long last, there's a new post over at The Restenford Project for those inclined to read such things.
Posted by Timrod at 1:29 PM 2 comments:

Jeff over at Jeff's Gameblog ran a post a while back about using different descriptors of the 6 basic attribute titles in order to take a fresh look at what these terms mean.  I thought this was a pretty cool idea, and have sporadically wasted a lot of time thinking about the topic ever since.

While the 3 "physical" attributes--Str, Dex, Con--don't stand to gain very much from this experiment, the far more ambiguous "mental" abilities--Intelligence, Wisdom, Charisma*--could definitely stand a new coat of paint.  Or better yet, strip off the paint, then take off the siding, the vapor barrier, and insulation as well so that we can see what the hell kind of frame is holding these things up.

Anyway, after months of frittering, here are my descriptors for the 3 "mental" attributes:

Aptitude: this is your characters ability to learn effectively, not necessarily his or her smarts.  A low aptitude could mean you have a learning disability, but you might very well be the only person on earth smart enough to understand Quantum physics.  A high Aptitude means that you are able to quickly glean the essentials of a field of study, but you might not be capable of taking the matter too deeply. You might, for instance, quickly learn new languages, but fail to understand the significance of the differing grammatical structurezzzzz...

Sense: this descriptor is copped directly from a comment from Talysman over at Nine And Thirty Kingdoms.**  This has a lot to do with the way I'm redefining clerics in my current campaign: they're more like unaffiliated mystics than deity-bound priests.  As such, wisdom measures ones ability to sense the presence of other things including but not limited to that ambush around the bend or the unusual book amidst all the pulp paperbacks on the shelf, but also the presence of water deep underground, the aura of the spy in the Duke's castle, and the spirits that inhabit the trees in your druid's favorite grove.

Cool: Not so much your ability to mimic the Fonz but, rather, Cool measures your capacity to maintain poise and bearing whether you're chatting up a hottie at the tavern, bluffing the Constable into releasing your comrades from custody, or trying to defuse a bomb with time running out.


* Yeah, I know, a lot of old schoolers use Charisma as a measure of physical appeal; fine, I got no beef with that.

** Though I don't believe that my conception of sense here falls in line with what he was describing.  Oddly, his recent re-conception of the cleric archetype sounds sort of like what I was failing to get at in my re-conception of the Wisdom attribute as a measure of devotion and mental focus.
Posted by Timrod at 10:52 AM 3 comments: 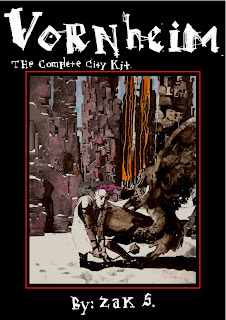 So, yeah, I jumped on the ol' Pornstar Bandwagon and bought the Vornheim book.  The Lapplander Econo Delivery Service got it to me just in time for my birthday, which was a nice surprise.  I won't say too much about the contents of the book because so far I've only been monkeying around with the cover which acts as one of those clever devices that Zak S. seems to have pioneered wherein a DM can determine the attributes of NPCs, description of a locale, and the outcome of several different potential situations all in a single roll of a 4-sider.

But what impressed me the most about this book--and this is embarrassing for me to admit--is that it's so freaking cute!  I was expecting a softcover 8.5x11" deal with removable cover and a map on the inside; you know, like old school modules.  But no!  This is one of those tiny, slender, little hardcover books that make you want to put it on the shelf between Dr. Seuss's Hop on Pop and the complete set of Little golden Books you got (as a/for your) kid.  Except that the book is all gothy black with Zak S.'s distinctive, grim, claustrophobic artwork all over the place.  In fact, just looking at the annotated elevation of the "Typical tower" on page 34 for more than 5 minutes will cause neuroses in the average reader and even vertigo in exceptional cases.  Excuse me, I have to go clear my head for a moment.

And there on the dust jacket, though I've seen the image a million times all over the internets, is that picture of Mandy Morbid--at least I assume that the pink mohawkish hair is Mandy's--standing knee-deep in snow and taking a whack at a peryton with her flail.  But what I didn't notice until I held the book in my hands is that each of the points in the peryton's antlers has a candle burning in it--which immediately brings to mind the ol' Hand of Glory.  I'm pretty sure that the peryton was taunting Mandy who clearly has first dibs on the term "Rack of Glory."
Posted by Timrod at 11:40 AM No comments:

Greatest (number of) Hits: Popularity has never been more deceiving

So I briefly placed the little "best of" widget on this here blog a moment ago, mostly to see which of my little rants gets the most internet action.  I removed it for a few reasons; partly because the widget was cropping the first 2 letters of each post off, which looked really stupid, and partly because I really don't want to encourage people to visit some of these "most popular" posts, but mostly because it seemed a bit grandiose on my part to post the greatest hits for a site that sees as little action as this one.  But then I couldn't let it die a quiet death so I wrote this up instead.