Back to the Backpack: New C&C character classes

If you've read the character class descriptions in the C&C PHB, or the new Unearthed Backpack tome, you're already familiar with the tried and true Troll Lords format: 3-5 introductory paragraphs comprised of 0-4% informative background and 98-100% 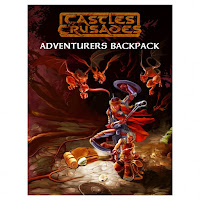 stock words and phrases selected at random from a large purple bin marked "Descriptive Text" and tossed together into a jumble of pseudo sentences. Words like "windswept" and "maelstrom" and "primal" seem to come up regularly. I wonder if the Chenault brothers have a side gig as script writers for movie trailers.

So in light of the paucity of information in these descriptions, and in order to spare my readers the suffering of reading many paragraphs of disjointed blathering--irony alert--I've distilled the 14 or so new classes presented in the Adventurer's Arcana down into one sentence (or less) descriptos for your ease of consumption. Read on:


Arcane Thief: MU who can't cast their own spells.
Archer: 'nuff said.
Divine Knight: Paladin on steroids
Foresworn: Fallen paladin.
Ethereal knight: Planes-walking, game-busting fighter
Magic User: Just like a regular MU except they get d8 HD, can wear armor and use swords but can't cast spells.
Oathsworn: Paladins who don't have to be lawful good.
Pacer: Master of Parkour
Primal Druid: Like regular druids but harder to track.
Rune Mark: More of a campaign setting than a character class.
Seeker: As a jack of no trades, the Seeker seeks a purpose.
Skald: Barbarians with wicked awesome tattoos.
Thief: see Archer, above.
Warrior Priest: Cleric.


Now for the quiz. Below you will see the first sentence of the character class descriptions from the book. Based on the information above, can you guess which class Monsieur Chenault was trying to describe?

Answers: In case you haven't figured out the pattern here, I didn't bother randomizing the descriptions; they're written out in the same order as the the list above. Which is to say warrior priest is 14, arcane thief is 1, runemark is 10, and so forth.
Posted by Timrod at 3:11 PM No comments: