We've all heard more than enough about the famous Appendix N from the original DMG; if you haven't it's basically a bibliography compiled by Gary Gygax of the literature that inspired Dungeons & Dragons.   But I've long wondered what some of the nonfiction titles might have been that egged EGG along in his effort to cobble together a fantastical subterranean medieval combat and treasure seeking role playing game.  In my head I've been calling this list "Appendix NF"--pretty clever, eh?--and with my recent discovery of Cliff Castles and Cave Dwellings of Europe by Sabine Baring-Gould, I've found a solid contender for my own D&D bibliography. 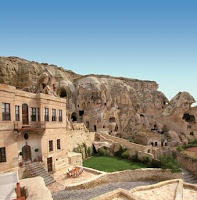 Published in 1911, the book describes in anecdotal form hundreds of different subterranean refuges and the often eccentric nature of the inhabitants.  A century ago when the book was first published, several of these caves were still home to different segments of society--a rumored druidic cult in Loire France, vacationers in the Riviera, or a society of outcasts living in benign destitution, again in France.  These and more are described in the awesomely titled chapter "Modern Troglodytes."  Other game-boner inspiring chapter titles include "Cliff Castles," "Cave Oracles," "Robber Dens," and "Rock Sepulchres."   The number of potential dungeon ideas is endless.  If snippets like this one: "I visited old Edrie--the subterranean labyrinthic residence of King Og--on the east side of the Zanite hills" aren't enough to get your dungeon-making juices flowing then I doubt you're even reading this.

There are some illustrations in this book as well; old timey sketches by the author and occasional photographs--though not nearly enough of them to satisfy the visual demands of a 21st century gamer. But the antiquated, anglo-rific prose reeks of Lovecraft at times, such as when "A mass of cretaceous tufa has slipped bodily down to the foot of the crag."  And at a century old, this book has probably been in the public domain since well before you were born, which explains why it is readily available from numerous print-on-demand outlets as well as for those downloady computer book thingies that non-cavemen read on the bus all the time.  Hell, go over to Project Gutenberg and you'll be reading the thing for free in like 3 clicks of your mouse.
Posted by Timrod at 12:40 PM 1 comment: