If you have a stationery fetish like me, you need to visit this website toute d'suite:
http://www.printablepaper.net/
You can get PDFs of the standard graph paper and hex paper but also all sorts of odd varieties including octagon graph paper, pentagon graph paper, logarhythmic graph paper, polar graph paper for the next time you go through Lolth's DemonWeb Pits.  Oh man, it just keeps getting better.  Shooting targets, chess boards, comic pages, music composition paper, storyboard templates, columnar pad paper for your accounting needs, knitting templates, calligraphy stuff, light blue paper with whit elines for folks who don;t like high contrast...  And, for you Euro-trashers out there, you can get much of this awesomeness in A4 size!

Did I mention this stuff is all free?
Posted by Timrod at 11:07 PM No comments:

While fighters get a bump at every level and bigger hit dice, in my mind, Clerics and Thieves are somewhat combat neutral: they get d6 HD just like normal people--they start at +0 and move up only every other level.

Meanwhile, combat deficient MUs not only start in a hole but dig deeper as they progress in level.  This combat dissipation of the magickerial class is probably the result of tangling with eldritch powers or the painful piles they develop from sitting around blogging in all their spare time. 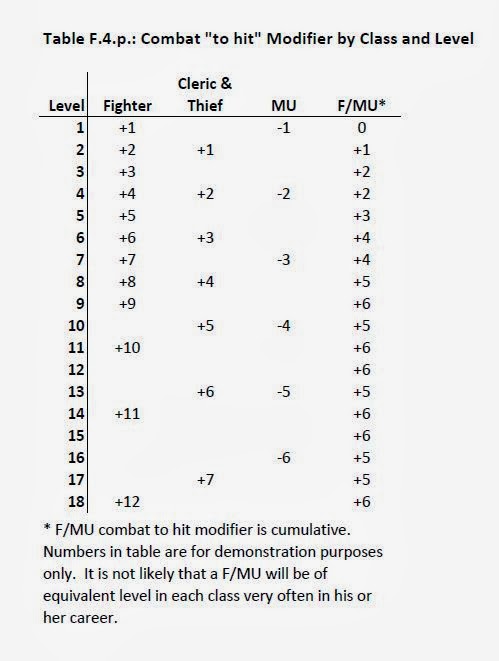 Further to the footnote, the same principal of cumulative modifiers applies to T/MU and C/MU multi-classed characters.  Also, everyone knows that the highest level F/MU you could possibly have is a 7th/11th level elf, right?

The movie I most closely associate with D&D is a movie that I've never actually seen: 1981's Dragonslayer.

The reasons for my association are obvious: it came out in the summer of '81, shortly after my 12th birthday, when I was 6 months into my D&D career.  In the thralls of early D&D obsession, I was avidly reading anything that even vaguely resembled "fantasy."  Then along came a movie--a real live movie!--about D&D stuff; it was confirmation that what I was going through was a legitimate cultural phenomenon.  Unlike all the obscure books that I was reading that otherwise went unnoticed in the nether regions of the local library's science fiction section, everyone who saw the ads on TV or the posters at the local cineplex was aware that here was a movie about dragons going on: D&D in film format!  And even if no one saw it--it did not do very well at the theaters--it still put the fantasy genre on the cultural map along with James Bond and Indiana Jones--"For Your Eyes Only" and "Raiders of the Lost Ark" being two movies I did see that summer.  And even though I still haven't seen the movie, I did read the novelization and the Marvel comic book version.
Posted by Timrod at 2:31 AM 5 comments:

As I've mentioned before, though I thoroughly disapprove of these sorts of challenges, questionnaires and other group divulgence endeavours, I also can't quite resist them either.  So, while I'm not fully engaging the blog hop challenge, there are a couple of items on the list that I can't pass up.  So please sit tight and listen up, I'm about to tell you the fascinating tale of the death of... Elfrandel the Executor

He was my first ever AD&D character, a high octane elven fighter/ranger/magic user/thief/assassin/bard or somesuch insane combination of classes.  It was the end of summer 1981, 7th grade was only a few days away, and I had been bowing out of D&D sessions with the gang for the last month.  The combination of our hack 'n slash approach to dungeon creation and the omni-classed elves that everyone was running at the time had rendered gaming sessions into tedious dice-rolling marathons.

But, I was starting to do other things instead of playing D&D, including joining the soccer (futbol) team.  On the first day of soccer practice I came home with a pain in my leg that would turn out to be a season-ending stress fracture, and was unceremoniously informed by my brother that my character, Elfrandel the Executioner, had bit the big one.  I wasn't even there for the event.   I assumed even then that the rest of the players had just gotten tired of running my dude for me and let me have it.  And I didn't really mind that the character was dead--I don't even think I asked how he met his end.

What did bug me is that they were essentially telling me that my D&D membership had lapsed, I was out of the club. Even though I'd been skipping out for half the summer, that had been me bailing on them, but now that they made it definitive, yeah, I was kind of hurt.  But, even though my soccer career didn't even last until school officially started, I still found plenty to do to entertain myself in junior high.  I was a class representative on the school social committee, "played" on the basketball team, though I shot 0% from the field for the entire season, was active in my church youth group(?!), served as a stage hand for the drama club (!?!), and even dipped my toes into the turbid waters of adolescent dating (!!???!); all kinds of  crap that I can't imagine was ever a part of my being.  So in response to how did I handle the death of my first character?  I went out and got a life.


Obviously, however, D&D and I were not finished with each other and it was the nexus of two events that changed the course of history: Christmas and puberty.  That year my mom, blissfully unaware that my D&D "phase" had been over for many months, got me a load of random D&D accessories, including the World of Greyhawk Folio.  The map and gazetteer suddenly grounded D&D in its own world, much like all the shoddy fantasy literature that I'd been devouring for the last year.  It gave D&D a big picture beyond wandering from town to town in search of dungeons so that we could wander from room to room in search of slaughter.  It gave us an idea of what to do with our high level characters.  I was re-hooked.

As for the puberty part, while poring over all my new D&D booty, my height doubled to 8-foot-4 overnight [I trust that my readership will surmise that a Hyperbole Alert is in full effect].  I became a moody prick, distanced myself from most of that extra-curricular crap, let my grades slide, and took a step back from the female of the species for next 4 years.  Instead, I re-focussed my energies on D&D.  And comic books.

In the winter of 1982, while keeping abreast of the X-men's dealings with the Krull, the Marvel's "Contest of Champions" and all the other important goings-on of the Marvel-verse, I churned out nearly 3,000 unfinished dungeons, filled out twice as many character sheets, [again with the hyperbole alert] and meticulously devoured every other word of the AD&D rulebooks; I had transformed myself into a sort of D&D golem using my newfound wisdom to finally crack the code of the enigmatic "percentile dice" that had befuddled our gaming to this point.

Actually, scrap all that.  Now that I think of it, Krasdale the Lizard Man died in action in July of 1981, pre-deceasing Elsinore by more than a month. How did I handle it?  I let fly a series of expletives, including my first ever use of the f-bomb.
Posted by Timrod at 1:15 AM No comments: