I was wandering around over at the ol' Judge's Guild the other day when I discovered that they have  their own version of a random character generator (download it here), which also includes the one thing I really wanted to add to mine but didn't have the mojo for: a random name generator. The Judge's Guild version is made "For Use with the Universal Role Playing System" (URPS?) and contains character races such as ghuls, lunari, bardik, and confeds, but still, it's pretty cool. 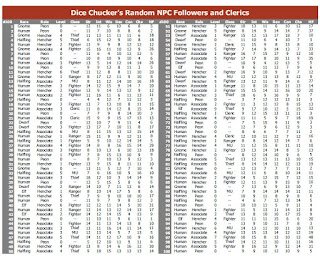 The other day, Commentor Antoine pointed out that the follower thing doesn't seem to roll clerics. Indeed, there was a flaw in the programming wherein druids and thieves overlapped on the cleric parameters. Anyway, I made a new version that basically just replaces druids with clerics. If it's your thing, by all means, go for it.
Posted by Timrod at 12:56 PM 1 comment:

On Friday I ran a piece about my Random Follower Generator but I failed to provide the link to download the thing. Here it is. Also, I made it more printer friendly 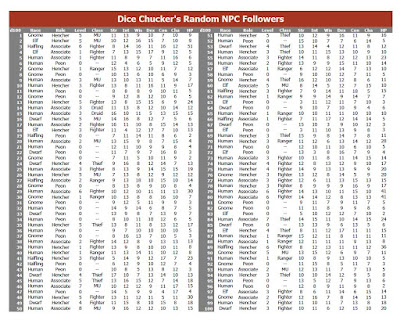 and, for those without an 80-sider handy, expanded the list to include 100 randomly created peons, henchers, and assholes. Go forth and impart these randomized roleplayers with souls!

Also, if anyone savvier with spreadsheet formulae than I makes improvements on it, I'd be interested to hear what you come up with.

It seems some folks had other thoughts on what a post called "80 Followers" on a D&D blog would be all about. It's a reasonable assumption, so I got to work and came up with a spreadsheet for creating random NPCs. Sure, nobody needs it, and even less people want it, but, in the making of it, more fun was had than anyone could reasonably expect from something so inherently dull as spreadsheet software.

Each NPC falls into one of three "roles": peons, henchers, and associates; plus a bonus role called "rivals." But don't worry about them because they almost never deign to show their faces. Seriously, of the 10,000 odd NPCs I've randomly created in the last day or two I've seen precisely 2 "rivals." Everything is determined by the 6 randomly determined (3d6 style) basic abilities. One's role is a measure of how good his or her average ability score is; your level is affected by your charisma and intelligence--cuz I figure being smart and charming's gotta be worth something, right? And in a reversal of the way we roll the dice, NPC class is determined by hit points, which was a lot easier to program than trying to finagle it via the more traditional ability score approach. Besides, I prefer a world where clumsy thieves, feeble fighters and moronic mages overcome their handicaps and achieve a degree of competence at a thoroughly inappropriate skill.

As a result of this HP-class determination, the NPCs with the lowest HP-to-Level ratio end up being MUs. And since HP are influenced by Con, MUs tend to have lower constitutions than other classes, which I kinda' like. But there's enough randomness in the process that an unlucky character with a high constitution could very well find himself wearing a magically delicious pointy hat festooned with Lucky Charms.


Race is a function of various abilities in relationship to each other rather than strict max/minimums, so while elves tend to be dexterous but frail, they aren't precluded from being either clumsy or robust, although it is unlikely that they will be both simultaneously.  I haven't incorporated any race-class limitations, yet I have seen very few Dwarves or haffies dawning the MU robes. The Dwarves make some sense, as their ability ratio tends to favor a higher Con--and therefore higher HP--but there is so much room for randomness in the system that it's actually kind of shocking that I haven't seen a single halfling wizard yet.

Anyway, I'm rather pleased with the outcome; download it here if you feel the urge.
Posted by Timrod at 4:48 PM 3 comments: