Assassination Resuscitation: The Old Man of the Mountain Returns! 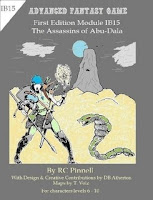 Sorry New Hampshire, your craggly old man is still absent from his mountaintop perch.  I'm talking, of course, about the "old man" in northern Persia, Hassan i Sabbah, who popularized the secret society movement with his devoted throng of assassins in the 11th-12th century.

Owing to my recent obsession with the Assassin class from AD&D [see most  of my posts from October - November of last year], anything with the word assassin in it tends to catch my eye lately.  So when I was trawling the internet for cool downloads the other day, First Edition Dungeon Module I15: The Assassins of Abu-Dala by R.C. Pinnell smacked me across the oculars like an errant tether-ball.  It's a desert-based assault on a mountain fortress described as having once been "home to the old man of the mountain; better known as the father of assassins."  Nice!  Also, there's a bit about the assassins ransacking caravans and slaughtering them to a man, which may or may not be a reference to the dastardly modus operandi of the Cult of Thuggi in India--whence the term "thug"--which was yet another secret society devoted to murder.  Anyway, I dig anything with a cool historical reference that I'm even mildly knowledgeable about so I'm taking my gang of PCs through this one next.
Posted by Timrod at 2:03 PM No comments: