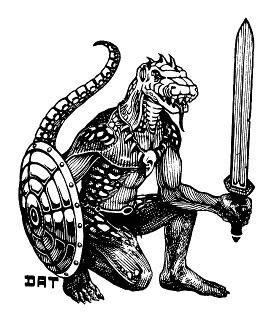 Man that dude is bad ass.  Back in the summer of '81, I meticulously copied this drawing from the Monster Manual for the character sketch of my second-ever AD&D character, a chaotic good Lizardman Ranger/Assassin named Krazgul or something along those lines.

My older brother hated him and, as DM of Lizardman's first dungeon, quickly killed him off.  Krazgul dove into a pool of water only to find out it was acid.  RIP Badass Lizardman.  My brother was just jealous that I thought of making a character based on this dude first.

I especially like that Tramp drew this guy in defiance of the description of lizardmen in the MM, which basically says that they are uber-(neder?)-primitives, and only the most sophisticated amongst them will use a club as a weapon and yet here's this guy with a bad ass sword and a gleaming metal shield that's so awesome Captain America would've fellated Perseus to get his hands on it.
Posted by Timrod at 2:00 PM

It's still the best Lizardman art in the game. I've yet to see someone do a cooler Lizardman illustration in any of the books. Though they have imitated this same picture -you can always tell by the shield- many times over the years. None compare to Tramp's though. In fact, most of Tramp's monsters are pretty damn good and iconic.

I've always had this as my mental image of a lizardman, and the actual descriptions have always seemed wrong, never living up to it. Why must they be swamp primitives, when Tramp's is so... awesome? I want that one in my game, not the one the text describes.

tell brother to piss off and bring him back

Whoa. Phoebus. Totally forgot about that dude. Synapses which have not been called upon since the 80s are now firing up, this could take a few minutes...

Totally. And I envision lizardmen as a degraded race, seeking past knowledge and 'magics' from the days before all those chattering monkeys showed up...

i once made a lizardman with the giant template [he was just really big, no cross breeding or such] named Facet. he was a druid who did'nt get along with the groups edgy drow who he had promised [the drow's] father he would protect. at one point he was trying to mutate or poison another party member or something so i grabbed him by the feet, slung him over my shoulder an' kept walking. facet has not since been killed but then he's the guy that smells EVERYTHING to make sure its safe.

Also one of my favorite RPG nostalgia images. Admit I always experienced some cognitive dissonance in trying to merge the picture with the descriptive text--oh those beautiful (and fertile) inconsistencies!
Envious that I never had the idea to make a PC out of him/her. Still time?

GreenG: There's still a chance but the window is closing. We're accepting applications until August 15.