Celebrate the Feast of St. Cuthbert

As all you hagiophiles already know March 20th marks the feast day of St. Cuthbert who died on this day in 687.  Greyhawkophiles will know St. Cuddy as one of the original deities of EGG's home campaign.  But here are a few things you might not have known about the patron saint of quality head-wear:

Here's the table I'm going to use in my next Gonzo campaign.  As you will see, the genre tables are not done yet, I've only managed the one for 007.

Posted by Timrod at 1:19 AM No comments:

Greyhawk: Origins of the Oeridian People

We know from the history of Eastern Oerik that the Oeridian peoples came to the Flannaes from the west, sweeping across the eastern portion of the continent, pushing aside Suloise and Flannish peoples alike to dominate the region politically (The Great Kingdom), linguistically (Common Tongue), and even calendrically (C.Y.).   It's possible that their dominance even gave name to the continent (Oerik) and the planet (Oerth) of which the Flannaes are a part.  But we don't really know for certain where these fierce peoples came from.

We do know that, harried by the humanoid mercenaries employed by the Bakluni in the Baksulian Wars, the Oeridians began migrating eastward from their homelands somewhere west of the vast mountain chains that separate the Flannaes from western Oerik.  Thanks to the chronology in the Gazetteer, we also know that this migration peaked in 187 O.R. (Oeridian Reckoning, subtract 644 to determine C.Y dates). But official sources are somewhat vague about the actual source of the migrations.

If we take the map of migrations in the Gazetteer as accurate, see figure 1, it would appear that the Oerid people originated in the environs of the Dry Steppes.  However, the text describes the Dry Steppes as the once-fertile homeland of the Bakluni peoples, rendered inhospitable by the Invoked Devastation.  No mention is made that Oeridians ever occupied this area.

Perhaps addressing this very concern, the map of migrations in 1983's  A Guide to the World of Greyhawk moves the label of the Oeridian migratory arrow to indicate that maybe the Oeridians came not from the Dry Steppes, but from Ull [see figure 2].  The Guide describes the area as being the homeland of "a strong tribal clan of Paynim nomads."  Again, no mention is made of the Oeridians ever having lived there.

It is conceivable that the Oeridians were completely uprooted from their "native" lands.  But the question it raises is why wouldn't the cataloguer who compiled the Guide and Gazetteer--who betrays an Oeridi-centric worldview elsewhere in the tomes--have mentioned the significance of these lands to the Oeridian people when the map indicates that the two are inextricably linked?

To further obfuscate the matter, the Old Oeridian language is described as:


"A younger language, totally free of outside influences until a few centuries ago.  As a result, its linguistic components are unique and translation into any language except Common is all but impossible." (p. 8, Gygax 1980)

This works well with the chronology which sets the Oeridian Reckoning of years as the most youthful calendar in Oerik--other than the Aerdian Empire's conflated "Common Year" of course--by 1500 years.  But how could a people whose homeland was in such close proximity to another, older culture--the Bakluni--develop a language so alien from their neighbors?  And what happened 1220 years ago that made these people start a new calendar?

On our planet this would be a mystery indeed.  But Oerth is, happily, a fantasy setting where all sorts of cool stuff goes down.  It's entirely possible that the Oeridians were gated in from another plane; possibly by some deity or even the powerful wizards of the Bakluni; these were, after all,  the same dudes who brought down the Rain of Colorless Fire.

But there's another, more bizarre, explanation for how these foreigners arrived in the Flannaes; an explanation that has its roots in the body of Greyhawk literature: they came from space, Battlestar Galactica style.  There is, after all, a history of alien landings in the area: remember the spaceship that crashed into the Barrier Peaks near the land of Ull? 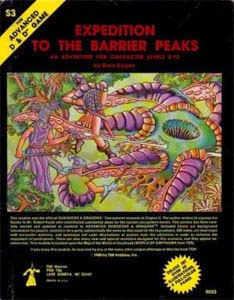 That's right, the Oeridians came from outer-freakin-space.  At least one of their ships crash landed in the mountains, many, many others apparently landed safely on the fringes of the Bakluni lands. And perhaps they melted down their space ships to make swords and plowshares.  Or they are still hidden somewhere; perhaps in an incomprehensibly vast underground hangar--I smell a megadungeon!

Anyway, the new arrivals established commerce with the nearby Bakluni peoples and, in order to facilitate such, a mutually agreeable language developed.  This language would provide the basis for the Common Tongue that would be spoken throughout the Flannaes in centuries to come.  That they call themselves Oeridians and  inhabit the continent of Oerik on the planet Oerth is either an attempt on their part to fit in by adopting the name of their new home, or it's the great irony of the Greyhawk saga: the planet is named after its alien infiltrators.