I'm on vacation in a place far, far beyond the reach of the internet so please forgive this piece of filler that I wrote up 2 years ago and never bothered to post. See you in the new year!

A while back, Rients posted a pic of a coolass bar mace.  I'd never seen its like before but then, whilst researching a completely unrelated topic, I came across this image: 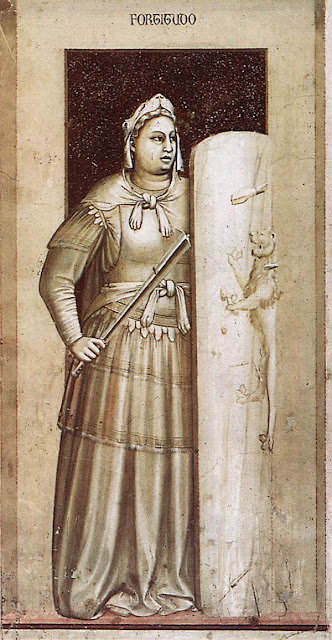 This dear lady represents the virtue of Fortitude, as depicted by some dude named Giotto on the walls of Scrovegni Chapel, Padua, c. 1304.  Do not mess with fortitude, you just don't have a chance.
Posted by Timrod at 10:18 AM 2 comments:

B2-T1 Keep of Hommlet: a self-diagnosed T1 obsessor goes off his meds again

As mentioned in yesterday's teaser, today we're exploring B2 Keep on the Borderlands and its potential as a link in the Hommlet series.  No, B2 is not based on T1 or the Sample Dungeon or any of that nonsense.  Don't be ridiculous.  But there are some similarities nonetheless.

This all started when I was looking around for a sequel to T1 for my current AD&D campaign.  I started eyeballing the Sample Dungeon as a potential source for a T2 Temple of Elemental Evil of my own semi-design.  I liked it initially only for the dungeon's inherent Gygaxian flavor, but as I started reading into it more closely, well, you know the story.

Something similar happened the other night when I started checking out B2 as a potential sequel--T3 if you will--to my semi-homebrewed T2.  Inspired by the stand of tamaracks--a tree unique for being both coniferous and deciduous, and, thus, particularly well suited to cold climates--on the wilderness map of B2.  Obsessive weirdos like me will recall that tamaracks are also present in the vicinities of the moathouse and the Sample Dungeon--indeed, I have it on good authority that the "T "in T1 initially stood for Tamarack. So I thought here's evidence that they're all set in a similar climate, that's a good starting point.  Plus: again with the Gygaxian flavor.

So I'm giving B2 a thorough read-through for probably the first time ever.  In contrast to The V. of H., EGG seems to be going for maximum genericness with the KEEP. NPCs are bereft of names, ability scores, and background of any meaningful sort; these are things that you, the introductory DM, are supposed to come up with on your own.

There is one exception, however: the jovial priest in apartment 7b of the KEEP.  Though he is nameless and statless like the other denizens of the Borderlands, he does have an agenda spelled out.  As you may recall, he is described as being a genial mo' fo', and, along with his two acolytes, would love to help the party on there quest for glory in the ol' Caves.  But don;t turn your back on him for too long because he'll club you senseless at the worst possible moment He's actually "chaotic and evil" and is "in the KEEP to spy and defeat those seeking to gain experience by challenging the monsters in the Caves of Chaos."

So just as in T1 we have evil agents in town who are only too interested in getting in on the party's expedition.  But in contrast to the malevolent traders in Hommlet who project an off-putting aura of d-baggery--only the most desperate of adventuring parties would ever do business with them, much less accept their company into a dungeon--the cleric in the KEEP has a better grasp of tradecraft; he actually has the sense to make himself likeable. Also of note: the dude who hires himself out as a guide in the Sample Dungeon is also up to no good; he's just hoping to steal the Fire Opal with the assistance of the party.

Over at the Caves Of Kaos, there is an imprisoned merchant awaiting his fate--just like the poor merchants in the ogre's pantry in T1--though this time he's to be the entree at a hobgoblin banquet. And just like his compatriots in the moathouse, he too offers a reward for his release, though he's a much more generous chap than the cheap bastards in Lubash's pantry who could only spare meager wad of silver pieces for their saviours.

Also, there are a couple of fire beetles in adjacent-ish rooms in the minotaur caves, but that's a similarity to the Sample Dungeon, not T1.

And then there's Cave K: The Shrine of Evil Chaos; a cloister of evil clerics and their malevolent little underground chapel in red and black that bears some resemblance to Lareth's malicious little cult. And possibly to the cleric and hobgoblins in the Sample Dungeon as well. Plus, try to convince me that "Shrine of Evil Chaos" is not the Basic-ified version of the phrase "Temple of Elemental Evil"--they're one and the same.

And again there's the long tunnel to a location off the map near the cleric's quarters, just as in T1--and possibly the Sample Dungeon--though this one is blocked with fallen rubble and is obviously not their personal means of egress.  Though the head cleric's quarters are described as lavishly decorated, much as Lareth's joint is in T1, there are no flaming eyeballs or fire opals or other physical evidence to link this cult to those that inhabited T1 or the Sample Dungeon.  But the place still has the feel of something ominous hiding just barely beneath the surface, awaiting its chance to break out and corrupt and oppress all of humanity.  I wonder what Gygax was reading back in the late 70s that inspired all this cultiness.
Posted by Timrod at 12:00 PM 6 comments:

Into the Ruined Monastery of Evil Chaos on the Borderlands of Hommlet... Near a Keep

That is the working title for a campaign I am cobbling together using T1 The V. of H., the Sample Dungeon of the DMG, and now... B2 Keep on the Borderlands.  Yes, I've found adequate linkages between B2 and T1/Sample Dungeon to enlist it into the fold.  I won't go so far as to say that B2 is based on the same source material as the other two dungeons, but there is enough evidence to suggest that Gygax was not done scratching his evil cult conspiracy itch when he penned B2.  More on this tomorrow.
Posted by Timrod at 1:30 PM No comments:

So the gang was rolling up new characters the other day--quite probably several months ago by the time I finally get around to posting this--when something alarming happened.  Odyssey the Assassin--the name only becomes mildly humorous when you consider that there is also a paladin named Prelude in the party--rolled off this set of ability scores using 3d6 in order:


What's amazing here is not the scores themselves--though slightly above average they are nothing spectacular--but that, considering we choose character class before rolling abilities, Odyssey is the first ever character that actually looks like what one might expect his chosen class to look like if we were arranging our ability scores.

Not only do Odyssey's ability scores exceed the minimum requirements for assassins per the PHB (Str 12, Int 11, Dex 12)--a first for a member of a subclass in our game--but, what with his highest ability being on Dex, next on Str, next on Int, lowest on Cha--aficionados of AD&D will recall that characters with Cha of 5 or lower can only be assassins thus making low charisma a de facto trait of assassinry--he actually seems optimized for the role.

In ~2.5 years of the Choose-First method, we've had loads of big dumb MUs, clumsy thieves,  charming dwarves and the like, but this is our first truly adequate character.

It should be noted that we've been completely ignoring established AD&D ability score thresholds for character classes ever since we moved our game from S&W rules to AD&D (via C&C) a year ago, but it brought a feeling of triumph over our gang to see that a straight up,  3d6 in order could finally score us a qualified member of an AD&D subclass.

It need not be noted but I'll tell you anyway that assassins in our game are more of a fighter/thief hybrid: they can choose up to 5 thief abilities--the more they choose, the more they suck at each of them--and they use fighters' combat table but at the +2 / 2 levels as opposed to +1/level progression if that makes any sense.

Those who recall the Gold swap rule mentioned in a previous post might be interested to know that Odyssey opted not to swap his Gold score, which was 12.
Posted by Timrod at 1:30 PM No comments:

So what did come of Tramp?

Yes, I know; back in the late 80s, he dropped his ongoing Wormy cartoon mid-storyline and disappeared without a trace.  Then in the early 00s, thanks to the Saluki student newspaper, he briefly resurfaced as a cab driver in Southern Illinois and has remained out of the public eye ever since.  But really, his vanishing act started long before that.

With only my admittedly incomplete collection of early D&D products to go on, it seems that Tramp came into the TSSR fold in ~1977, when he contributed a few drawings to the Holmes Basic D&D book and then split up the bulk of the artwork for the Monster Manual with David Sutherland.  They teamed up again for the PHB in '78 and the two of them handled most of the early module art as well--notably, Tramp did all the artwork for the original T1 Village of Hommlet (1979), with Jeff D's cover art showing up only with the later printings.

Also in 1979 came the DMG, the third core rulebook of the Game.  But rather than another tag-team effort between the two Daves, this one features more of an ensemble cast.  The artist with the greatest visual presence in the DMG is probably Darlene, followed by the numerous single-panel cartoons of Will McLean, though DCS also made his mark.  There are some early Erol Otus, DSL and Roslof pieces as well.  Tramp's contribution was limited to about 5 or 6 new illustrations and a rerun of his Satyr drawing from the MM.  It is, however, the venue of one of his most iconic drawings: the full page Emerikol the Chaotic.

But by 1980, Wormy notwithstanding, Tramp is pretty much gone.  His name is listed as a contributor in the Deities & Demigods cyclopedia, but, to my eye, no illustrations in it are obviously his. [EDIT: As it turns out, several of the drawings in the American Indian Mythos and at least one in the Central American appear to be Trampier's.  Thanks to ClawCarver's sharp eye for catching these.]   And the Moldvay Basic rules are completely bereft of the Trampier touch.  His only presence in the TSR-verse from 1980 on seems to be the Wormy cartoon from Dragon magazine.  Indeed, this article about life at TSR verifies that by 1981 he was no longer contributing to the "gaming side" of D&D.

I'm guessing that he couldn't have been living too high on the hog on the proceeds from Wormy alone, and I've never seen any works of his published outside of TSR; some old school reprobate would surely have dredged up something by now if he'd been, say, contributing work to a competitor--Lord knows Judge's Guild could've used his help.  So perhaps even back then he was driving a cab or some other anonymous vocation to put a table under his bread.  Which is to say, one foot was already planted outside the rpg art bizness.

What is astounding to me is that virtually everything we came to know and love about Tramp was drawn (or at least published) between 1977 and 1979.  Two or three years this young man--Wikipedia says he woulda' turned 25 in'79--had to influence the imaginations of millions of gamers, and man did he take advantage of that time.   Thanks Mr. Trampier.