Demographics of Hommlet: the Spreadsheet

My trusty colleague Rear Admiral D. Osgood III once again noticed that the ol' blogomatic device was out of gas so he wired a shipment of fuel over to Dicechucker Towers in hopes of restarting the boiler. And what form did this fuel dump take you ask? Why it's a spreadsheet detailing all the inhabitants of everyone's favorite town that nerdiferous pedants will tell you is actually a hamlet.

Osgood has pored over the text of the Village of Hommlet (I understand he is using the Hommlet portion of T1-4 Temple of Elemental Evil as his base text rather than the original, stand-alone module) and developed a thorough census of the population. If you're just here for the handy spreadsheet, here it is. Use it in good health. Or poor health; I won't discriminate against the infirm.

If you want some analysis--or you're just killing time until the pandemic is over--stick around for further reading: 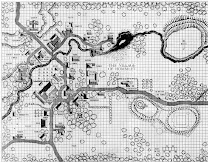 The Male:Female ratio is 7.7 men to 1 woman. This is made more significant when one considers that just 10 years ago the region was at war; you'd expect at least a few widows in this town. Or perhaps it was the women of Hommlet who cleared the moathouse, thus leaving the menfolk to step in and fill the gaps in the militia in the years hence.
The write-up on the Inn mentions that "when the season arrives there will be one or two "likely lasses hired on". What exactly is a "likely lass"? And what season is it that brings more bustle to the burg of Hommlet? Fall foliage? Hunting Season? Hockey season?
Over at Rufus and Burne's tower, the 16 mercenaries share a 20' d. room at the top of the tower for their lodgings while their capt and lieutenant get tiny yet private chambers on the floor below. But there are two 2nd level fighters posted as guards in the tower who do not appear to be affiliated with the mercenary posse that sleeps up in the turret. Since there are no other 2nd level fighters at the tower to relieve them, it must be assumed that they are always on duty and therefore have no need for a place to sleep.
Also, those two guards have AC 5 and carry shields which means they must be wearing scale mail. No one in AD&D ever used scale mail. Leather and chainmail are prevalent, obviously, but studded leather and even ring mail--studded leather's disfigured troglodytic half-brother--occasionally make appearances, but no scale mail. And this despite it's cinematic appeal.
Posted by Timrod at 11:09 AM 1 comment: