Coming in January, the bigwigs at Dicechucker Enterprises are throwing a bash in honor of 5 years of my life occasionally spent engaging in bloggomy.  For the event, the Powers-That-Be have rented a real, live haunted house on an island in the middle of the St. Lawrence River.  The island was once a fin de siecle summer resort for the wealthy, and is littered with gilded age mansions, but in the ensuing years it has become a disputed territory in the no-man's land between the US and Canada.  The island is claimed by Quebec, Newfoundland, Vermont, and Rhode Island as well as the Akwesasne Nation: dual US-Canadian citizenship, documented Mohawk heritage, serviceable knowledge of French and/or Kanien'kéha  language, snowmobiling experience, and ice-fishing skills may all be helpful in gaining access to the island.  Wearing the appropriate hockey sweater may go far to sway reaction rolls in your favor; though Maple Leafs or Bruins jerseys are not advised.

Given its status as disputed land, the island is a haven for smugglers and outcasts of all sorts, including the Bladerunners--a gang of kids who skate back and forth across the Fleuve delivering hockey sticks and illegal metric rulers to the south, then heading north with packets of hot cocoa mix and unpasteurized cheese curds for the poutine mills of Labrador.   Other factions in the vicinity include a Marxist snowmobile gang, Francophonic Sumo wrestlers, and a colony of rock candy sculptors

But, to the point:  The island is littered with grand old houses that are obviously too haunted for anyone's good. Attached is the floor plan, I'm looking for proposals to dungeonify this here haunted house. The top 5 entries will be granted directions to the island. 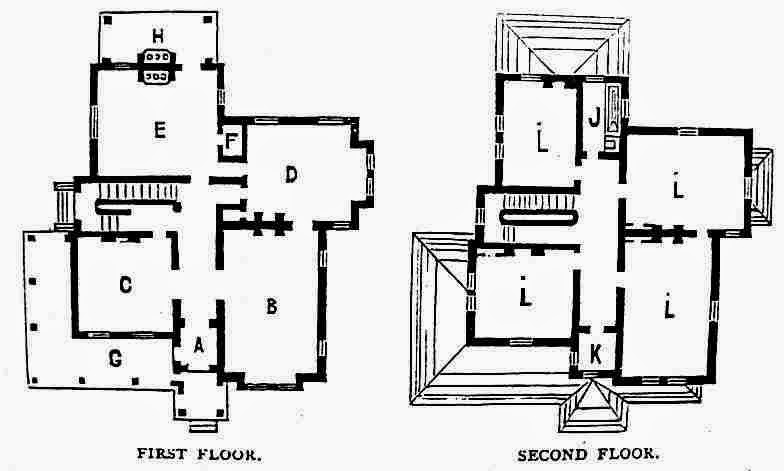 A few posts back I finally hit 200 actual, posted posts.  I mention this now not because I expect anyone to give a damn, but because, last year, when I ran a series of posts riffing on the my inflated post numbers as illustrated on the blogger.com dashboard, something weird happened: these posts racked up pageviews in record numbers.

These were clearly throw-away posts meant only to occupy my fatuous mind for a few moments while I tried to think of something real to write about, but all three of them* were immediately deluged with pageviews at a rate way out of proportion to anything this blog has seen before or since.  Overnight these banal little posts were racking up over a thousand pageviews.  In the 5 years this blog has been in existence, only two other posts have broken a thousand pageviews and it took many, many months--and a diligent publicity campaign by Grodog--to get there, not a single day.

Obviously no one wants to read about how many times I've bothered posting to this silly blog, so clearly these hits must have been generated by some robo-hitmonkey in Shangai or Minsk or Cleveland.  But what is it about these silly little posts that made the robo-hitmonkey click itself into a stupor on these content-less posts-in-name-only?  Is there something intrinsically appealing about posts with titles that follow the formula "[# of Posts]th Post!"?  Was it something else about these posts that drew the attention of the voracious, stat-blasting robots?  Has anyone else encountered this bizarre phenomenon?

*One of these posts was renamed to see if changing the name would influence the hit count.  Results were inconclusive.

[EDIT: Two days later, this post has drawn a fairly reasonable 40 hits.  Apparently the formula is no longer appealing to the cyber locusts, or I missed the point entirely.

As my regular reader might recall (hey Dave, how was your Christmas?), there is a longstanding mandate from Dice Chucker HQ that my output of posts in any calendar year must be a multiple of 6.  As there are only a couple o' days left here in '14 and I'm not quite to 30 posts, I'm pillaging my vast store of unfinished drafts for filler.  Case in point: here is a post I started writing back in October but soon lost interest in.  Now I grant to you the opportunity to lose interest in it as well...


I just got an email from ebay telling me that it has been 10 years to the day since I signed up for ebay, which I did for the express purpose of purchasing old gaming books from my gaming heyday back in the 80s.  Which is to say, it's been 10 years since I took my first steps down the rabbit hole that eventually led to you reading these pixels.

But, despite all the crap I've written about on this blog, that first item I picked up on ebay was not a D&D book at all.  It was the DragonQuest 2nd edition rulebook.  And the first thing I did with it was convert L2 Assassin's Knot to a DQ adventure.  Why would I bother doing that?  Beats me.

The message from ebay got me thinking about the ol' DQ again, and, in particular, how it differs from D&D.  Not in obvious mechanical or aesthetic matters, but in the feel of the game.   Here's a rundown of the perceived differences in how the game plays out, based on my experience:

Parties were smaller: we never had more than 3 players at a time--partly 'cuz if we could get more together we would just play D&D instead. Also, we only ever ran one character to a player, no henchers or hirelings either.  I've always suspected that this was because running a DQ character seemed to absorb more of a player's attention than a D&D one did.

Adventures were shorter: usually they were commando-style raids or heist jobs or other indirect assault maneuvers intended to minimize combat.  Partly this was because DQ adventures were usually side projects played out during lulls in our D&D-playing schedule but also because...

Combat was lethal-er: Although the two-tiered hit point system of Endurance and Fatigue--you had to get through one before you started inflicting damage to the other--made it difficult for even low level characters to die from a single blow, it was certainly not impossible.  A well-rolled strike could leave you with a messy bleeder, a permanent handicap, or quite dead, while "directly affecting endurance" shots bypassed the 2-tier system--as well as any protective value of your armor--and usually left you stunned or dead as well.  Likewise, the monsters were protected by the 2-tier system as well so that even a lightweight kobold-like opponent was probably going to survive at least 2 blows. If you'd already faced a few other opponents that day and run out of fatigue, you were at a serious disadvantage facing off against a fresh enemy of a much lower caliber.  It was pretty unlikely that even powerful characters would remain unscathed if combat lasted more than a few rounds (pulses).  Whereas Friggird the 10th level D&D fighter encounters a gang of 10 orcs: the DM is probably just gonna hand-wave their demise rather than go through the motions of rolling the dice to see how long it takes to kill 'em all.  In DQ, on the other hand, a similarly high level combat-focused character (DQ doesn't have classes in a strict D&D sense) would be a fool to take on that many porkers all by himself: you never know when someone's gonna get lucky and stun you or lay open your aorta.

One of my gaming colleagues never quite got this distinction with DQ and kept sending us through full-on D&D-style dungeon crawls.  He'd get frustrated when, time after time, we'd open a door and see a gang of lizardmen or whoever and either a) slam the door and runaway, or b) start haggling with them, promising to bring them a family of plump halflings for a snack in exchange for, ya' know, not eating us.  Even after several TPKs at his hand, he still didn't understand that the DQ combat rules just didn't support the hack n' slash motif he was going for.

PCs were bigger:  This is a matter of personal perspective, but while I tend to envision my D&D characters as being about the size of the miniatures on the table, DQ characters I think of as being much closer to life-sized.  And covered with scars. I think the fragility of these characters made them loom larger in my imagination than most of my D&D characters did.

No Magic items: Magic items were not standard in DQ--I don't believe they were even mentioned in the rulebook--and, as such, they were pretty much non-existent in the game.  I remember one gang of characters we had spent their entire careers on a quest to find some legendary magic sword. I think the appeal for us as players was that this was a chance to find out how a magic sword would manifest itself in DQ; as of yet we had never seen one.  For that reason we were exceptionally distraught when we finally found the sword, only to have it stolen from our grasp--a la Belloq in "Raiders of the Lost Ark"--by the little old man that we had foolishly believed to be a benevolent sage.  Seriously, we spent the better part of a year hunting down this sword from person to person, dungeon to dungeon, but never did figure out what was magical about it.  Goddamn Macguffin.
Posted by Timrod at 1:51 PM No comments:

With 29 days remaining in the year, I thought I'd better get going on a few of my resolutions from last December.  I've got a big meeting with the stockholders coming up in January; I'd better impress or I'll be looking for a new cave to chuck my dice in.  That sounds kinda' gross, no?  Not a good start.

Posted by Timrod at 7:35 PM No comments: