Despite the fact that no one gives a rat's ass, I continue to nibble away at the AD&D Assassin class level titles one by one, week by creeping, tiresome week.  Now here we are at level 6: Killer.  Up there with murderer in terms of originality, but it's got more juice to it.  While a murderer can be any amateur who kills someone for any reason, a killer is someone who's practiced at it and perhaps even enjoys it.  Indeed, "killer" has taken on the meaning of adroitness at some particular skill, a la "lady killer." 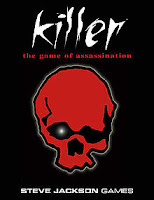 Also, it's the name of a live action role playing game by Steve Jackson.

Now, I could have have been really lazy and kept in the hockey theme and used Killer Carlson as my pop culture connection, but that seems kinda' trite.  Instead, here's Freddy Mercury for ya: 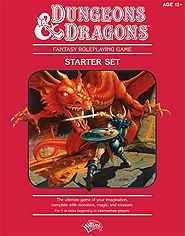 It was a cold, gloomy November day yesterday--perfect D&D weather--so I wandered over to my local nerd store to see what's brewing and what do I see but the red Basic D&D box staring at me.  I'm savvy enough to know that this is not the same game I knew in the 80's, but rather the Wizards of Renton have come up with a new marketing scheme in hopes of recapturing a crowd of aging, former players who maybe don't care for the new D&D look, what with its anime-inspired heroes wielding clumsy-looking weapons.  That sounds like me, right?  So, yeah, I picked it up and looked it over, and, at the righteous price of $20, I seriously considered it.

But I didn't pull the trigger.  While there were prominent non-gaming reasons for this--I was saving my shekels for mundane books of professional interest at a nearby bookstore--a big factor was that I'm a Holmeser, and by the time Frank Mentzer's "Red Box" set came out--or, as we called it at the time, 3rd Edition Basic--I was deeply enmeshed in AD&D and frowned on that juvenile--though admittedly slick looking--offering.  As a result I only ever played the Mentzer version for short snippets at school with Johnny-come-lately friends who got the red box for Christmas.  I certainly never deigned to familiarize myself with its subtleties--and haven't bothered to this day. Indeed, I was already an edition snob.

Beginning in 8th grade and stumbling along until 10th, I played in a long series of lunch-time micro-sessions usually using Mentzer rules.  These games were attended largely by novices which only served to exacerbate our inability to get into a gaming flow before the 5th period bell signaled us back to reality.  Our characters never developed beyond dice-wielding stat-golems, our dungeons just so many lines of carbon scratched on the backside of old math homework.   We sought out other stat-golems of questionable malevolence to pulverize with our dice and did nothing with the treasure we gained as, again and again, we failed to bring a single adventure to any semblance of fruition.  These sessions would go on for a few weeks or so before we lost interest.  Then, weeks or months later, having forgotten how dismal the previous sessions had been, we'd start up again with a whole new set of characters and a thermos full of as-yet unvanquished hope to wash down our PBJs on Wonder bread.

It is telling that I have no memory of any of the dungeons I ran, characters that I played, or even a single in-game event that occurred during these sessions, though I can still recall in great detail characters and events from my home game that occurred in years previous.  And it will likely come as no surprise that most of those friends who played during lunch didn't stick with the game for any length of time.  And as I found out yesterday, I still to this day associate the Red Box with tedious D&D played by disinterested kids; worried more about the upcoming French vocab quiz than  how to gain the treasure of the Many-headed-hydra.  I wonder about those friends wherever they are now; should they happen upon the same red box will it inspire poignant memories of lost youth? Or thoughts of adolescent boredom and gaming malaise?
Posted by Timrod at 2:35 PM No comments: 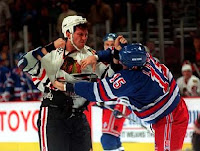 So we're up to Level 5: Thug.  To research today's post, rather than read up on the cult of Thuggee that plagued travelers in India for centuries by infiltrating caravans and then, when the time was right, murdering them to a man and making off with their goods, I spent the better part of the afternoon watching hockey fights on Youtube.  You just can't go wrong with Bob Probert, may his fists rest in peace. The consummate professional, he never looked back from a fight; once the last punch was thrown he just skated off and did his time.  You definitely got the impression that the fighting was never personal, and this is important to consider if you're entering the assassin trade.  It's a business; you take the job, you do the work, you move on.  A detached sense of morality is crucial.


Two of the heavy weights:

If you are interested in the Thuggee cult, check out Pierce Brosnan in The Deceivers, or, if you're one o' them literary types, read the book of the same name--written by John Masters--upon which the film was based.  I actually watched this movie a few years ago whilst on a Brosnan bender that included Matador--a great movie on the topic of assassins.
Posted by Timrod at 3:49 PM No comments:

"Congratulations my son, your latest accomplishment has merited advancement to the 4th level of assassinry," says the Guildmaster, "you are now--wait for it--a Murderer!"
"Murderer?!  I paste the innards of the heir-apparent all over the Baron's private bed chamber and I get to be a character in an Agatha Christie novel?  This guild is for douchebags.  I'm outta' here!"


For further reading: Ray Bradbury's prescient--if non-assassin-based--short story of technology-induced sensory overload, "The Murderer."  Nah, don't bother.  I mean it's all right but nothing special.

I'll try again tomorrow with Thug; much more meat there.
Posted by Timrod at 11:22 PM No comments: