Commentor Mark pointed out that I failed to mention items regarding Loice in the good ol' Quag Keep Companion, which inspired me to have another sift through Norton's tome in search of other goodies that I failed to mention. I'll add these to the actual Companion, but thought I'd draw attention to them here for those Quag Heep completists out there. Without further yada... 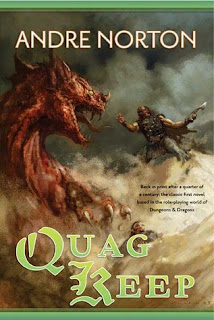 Brethern [sic] A band of mercenary-adventurers responsible for armed incursion into some of the most notorious regions of LoG in search of legendary treasure hoards.

Standard of King Everon Banner of the aforementioned monarch, last king of Troilan. Under this banner, Everon led his people against an invasion but was overwhelmed and met his end on the field of battle. At his death, the land of Troilan sank into a mire into which his banner was lost. Just as the meadows of Troilan sank into a dismal swamp, its people morphed into a lizardlike breed which holds drylanders with contempt. This item was captured by a group known as the "Brethern" [sic].

Loice, Mirror of This artifact of the great queen Loice is a flat stone of a shimmery, reflective rock that is said to have mystical properties. As with the Standard of King Everon, it is said to be lost in Troilan Swamp, though a group of mercenary adventurers known as the Brethern [sic] has claimed to have acquired it in recent years.

Loice, Spectre of The ghostly embodiment of Loice, legendary queen of Troilan who reigned over the land before it sunk into a swamp, the spectre is said to rise from the mire and command its denizens in defence of her soggy domain should it be threatened by outsiders. (#)

Wild Coast Stretch of shoreline above which Lichis the Golden and Ironnose fought for a time before plummeting into the sea. See Harrowing of Ironnose. (#) It is noted for its wildness.