For better or worse, I've never paid much attention to Raggi's blog for the same reason that I don't bother reading many blog posts with the word "Kickstarter" in them: marketing copy rarely makes absorbing reading.

As such when people throw around the acronym "LotFP", it carries a very different meaning to me.  Everyone knows from Tolkien that "L.o.t.-" means "Lord of the-" and as for F.P., I direct you to the following discussion between office manager Michael Scott and Ryan the Temp from season 2 of The Office (U.S. edition):

Michael: For emergency contact put down Todd F. Packer. You know what the "F" stands for?
Ryan: Fudge?

As such, I snicker like a sophomore every time I see "LotFP" in print.
Posted by Timrod at 12:30 AM No comments:

So the last thing I read before I went away on a camping trip last week was 9n30's post about universal first level characters (WARNING: no internet access + lots of time thinking by the campfire = 1 overcooked blog post upon return to civilization).  The timing was crucial, as just the day before I had been reading the Holmes and/or Moldvay rules and noticed that fighters in the Basic rules are not actually any better than anyone else at hitting stuff.  The only thing that sets them apart as combaticians is their unrestricted access to armaments and an increased potential for taking a beating--can you spell cannon fodder?  The Original rules are even more exacting on this point: at first level, Fighting Men are not even better to hit than Normal Men. Normal-freaking-Men!  And yet we call these chumps veterans?

So for those who live in the OD&D or B/X domains, Fighters are defined not so much by their prowess with arms but by their access to them.  This sort of dovetails somewhat with my recent obsession with starting equipment: since buying a sword essentially makes you a fighter, what if, at 1st level, you could pick up extra-classular abilities as part of the starting equipment allotment?  Like Talysman’s notion, everyone has access to the other class’s specialties, though they would only advance in those abilities related to their chosen class. But you’ll need to apportion your limited resources, which means that you’re not likely to have every other class’s stuff without unleashing the old jack-of-all trades-master-of-none maxim.  Rather than just picking what you want or buying the skills with an allotment of build points or gold pieces or what have you, you would roll 4 sixers on Table 1.01-f (below) and apply two of the dice to the column most pertinent to your class, splitting the rest of your dice amongst the other columns as you see fit. 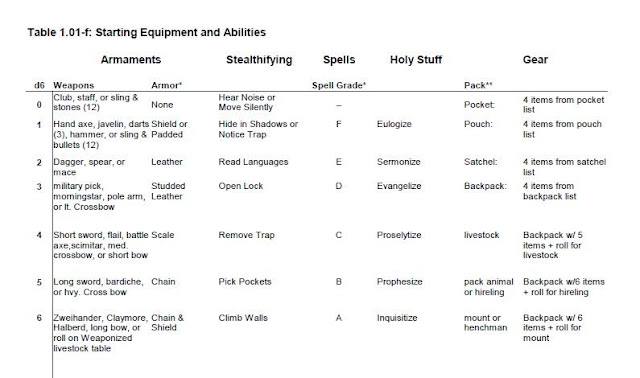 *For spells, roll again on a table that would look something like this:

Posted by Timrod at 2:40 PM No comments:

How much iron is in your rations?

If you're like me, you don't really have much of an idea what the hell iron rations look like, much less what they're made of.  As a kid I assumed they were cakes made of compressed Product 19; that assumption hasn't changed much in the intervening years.  [Does Kellogg's still make Product 19?  I don't think I've seen it since the 80s.]

Anyway, my recent foray into Equipment Theory has led me to seek out a clearer image of what sort of food my PCs are noshing on down on the 5th level of Adventure Module FU2 Abyss of Tumescent Malice.  Here are a few options I've discovered:

Dungeon Pucks—Unpalatable crumpets of dwarven manufacture, they are comprised of rendered catoblepas lard and quarry dust; only the truly hungry can bring themselves to eat one of these. It is said that rats turn up their noses at these biscuits and no known mold can find purchase on its dense surface.  Each provides one meal worth of sustenance, though it is a mean existence; after a week of consumption, save vs. Will to Live or sublimate into wraith-form.

Cialembas—Sickly-sweet tortillas made of acorn flour and pixie semen baked in an oven made of sugar cane, they provide lite yet satisfying fare, can be carried in great quantities without impinging on encumbrance, and cause prolonged erections. Extended use may result in cavities and/or spontaneous gender reassignment. Beware: acquisition of these wafers requires interaction with high elves of exceptionally tiresome demeanor.

Uruk-hooch—Foul but invigorating liquor made from goblin adrenal glands and Wild Turkey.  Small doses allow for improved strength and stamina; prolonged use causes psychosis of the liver.  Highly corrosive to metal, must be stored in glass or ceramic containers.  It is rumored to be an antidote to some of the side-effects of Dungeon Pucks and Cialembas.
Posted by Timrod at 12:06 AM 3 comments: