A2 Slavers Stockade: Advent of the Ability Check?

As you may have heard, I've been reading up on the A-series lately and comparing what I read to my fading memories of the '80s. A2 Secret of the Slavers Stockade has turned out to be a bit of a reality check for me because none of it matches up to my vague memories of that spring day in 1985 when an invisible Blodgett [the halfling thief from the pre-jens] leapt from the wall of a cavern to backstab a lance-wielding goblin who was riding on the back of a warg--and failed miserably. He was late on his jump, made a flailing attempt at a backstab, landed on his face for 3 pts of damage only to get up just in time to get lanced by the next charging goblin for 12 points of damage.

For the life of me, I can't find an encounter area in this mod that matches that memory. Is this another case of the Donjon Maestro taking liberties or am I just misremembering things?

Anyway, the purpose of this here post is really to point out an encounter area comprised of a chasm with a bunch of stalagmites sticking up from the floor. One can cross the chasm, the module informs us, by leaping from stalagmite to stalagmite, but the text states that you have to

"roll equal to or less than [your] dexterity on 1d20 for each jump."

I pose this question to you dear readers: published in 1981, is this the first appearance of a roll-under ability check in a D&D product?

A1 Undercity 2: The Stairway continues

One of my favorite parts of Dungeon Module A1 is this little tidbit from the map of the slave pits.

The cartographer drew this handy sketch to let us know that the northern portion of room #19C is accessed via a corridor that goes underneath room 18B. This is good to know cuz that's not clear from the map; one might otherwise conclude that there is no way to get there. I draw these sort of thumbnail sketches of the more convoluted portions of my dungeons all the time; it's nice to see one in an old time TSR adventure as well.

That said, what's the significance of the space? Is it essential that it goes under 18B above? More important, is it interesting enough to merit a special sketch? Well, it's the machine room for the works that open and close the slave pits in room 18--the actual levers that control the works are upstairs in 18b--and it's occupied by an aspis drone and a few slaves whose job it is to oil the cogs and such. It's nice that they acknowledge this sort of infrastructure, but is it worthy of the sketch? You be the judge. 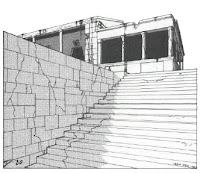 But then I took another look at the sketch and thought "That is the widest stairs in the whole modge [that's for you JB]," and if you ignore the context of the underground setting and squint at a spot just to the left of the arrowhead while singing the national anthem of a country you've never heard of, it just seems maybe plausible that this could be what inspired Jeff Dee's illustration of the stairs to the temple from page 3:

Posted by Timrod at 2:52 PM No comments: