I really, really, really dig reading other folks' character generation ideas--though I despise the term "chargen" with such intensity that my keyboard melted when I typed it.  In the spirit of sharing, I thought I'd put my own latest rules--they seem to change all the time so don't expect me to hold to these for very long--out here for those who fetishize this crap like I do. Without further ado, here are my Character Generation Rules for the hybrid AD&D/C&C/S&W/Hackmaster game I occasionally run:

Some other pertinent modifications:

Wisdom
Wisdom = keenness of senses.  It has no bearing on one's ability to commune with a deity, nor does it measure your willpower, guile, intuition, or judgment.  It measures how oblivious you are to your surroundings and that is that. What, you ask, does keenness of senses have to do with the actual meaning of the word "wisdom"?  I don't give a crap anymore.  For my purposes, dwarves and orcs aren't particularly keen; elves are. While every class has reason to want be keen-sensed--less likely to be surprised, better at finding secret doors and the like--thieves and rangers in particular pride themselves on being keen.  Clerics do not benefit any more from a high wisdom than anyone else.*   Man, that's a load off my back.  Shoulda' done that years ago.

*Actually, there are no clerics in our current party. And we don't miss them at all.

Favored/Off Abilities
In the spirit of perpetuating stereotypes, I  am continuing the tradition of non-human ability preferences established long, long ago.   But rather than a straight up +/-1 to certain preferred/lamented ability rolls as is generally the case in D&D-type games, prime/off abilities provide restrictions as to how demi-humans can use the gold swap feature swap abilities.  Basically: prime abilities can never, ever be lowered in a swap with your gold roll, while off abilities, conversely, cannot be raised. 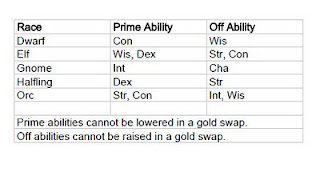 So Melfrond the elf rolls an 8 for Str, a 15 for Con, and a 9 for Gold.  Elves cannot raise their str or con with a gold swap, so he's stuck with the 8 str, but since his Con roll is higher than his gold, he could swap out the 15 Con, netting himself 60 extra gps to go shopping with.  Now he has enough to get a long bow and some chainmail.


Optional rule that I just thought of but which seems much more direct: If a non-human character's favored ability is lower than his or her off-ability, then the two can be swapped.  In the case of elves and orcs--who have 2 favored abilities--if both favored abilities are lower than one of the off abilities then the character dies of alopecia in 1d20 hours.  Any characters who have spoken to the afflicted before he dies must make a saving throw or likewise meet a hairless end. EDIT 11/2/11: After some playtesting, the focus group showed a strong preference for this rule.  Only humans can swap their gold with another ability if they so choose.  When we made up our last batch of characters not only did we not have any non-human characters, but we also found that folks were more likely to trade a low gold roll for a higher ability score than a low ability roll for high gold except in cases where the gold role was very high--say 15 or higher. Also, the alopecia thing was just a joke.  It's not really contagious.

Exp Bonus
We've done away with prime abilities; having a high strength is inherently advantageous to fighters, but it does not mean they are better at improving their fighter skills.  Same goes for everyone else.  Instead, Intelligence--in its aptitude aspect--affects experience bonus for all classes.  Int bonus x 5 = % exp bonus/penalty.  So a low Int character of any class is going to progress slower than his smarter brethren.

This might not sound very sensitive but I'm gonna' say it: Just say no to mongrels!  In my world, elves are not particularly fertile--the elfmaid estrous cycle is decades long and it's unlikely in the extreme that a human female would ever succumb to the effete charms of an elfgroom--and human-elf pairings are exceedingly rare; as such half-elves are so rare that they can be dealt with on a case by case basis.  And half orcs are straight-up, full-on orcs.