Halflings III: Boggies and Hobbits: closer than you think


Back on Day 1 of what is turning out to be Hobbitfest '14, Leicester provided a bit of text from the Lord of the Rings parody Bored of the Rings to help folks unfamiliar with boggies to understand what they were all about. Here is the quote from Leicester (who was quoting The Harvard Lampoon [who were satirizing JRRT]): 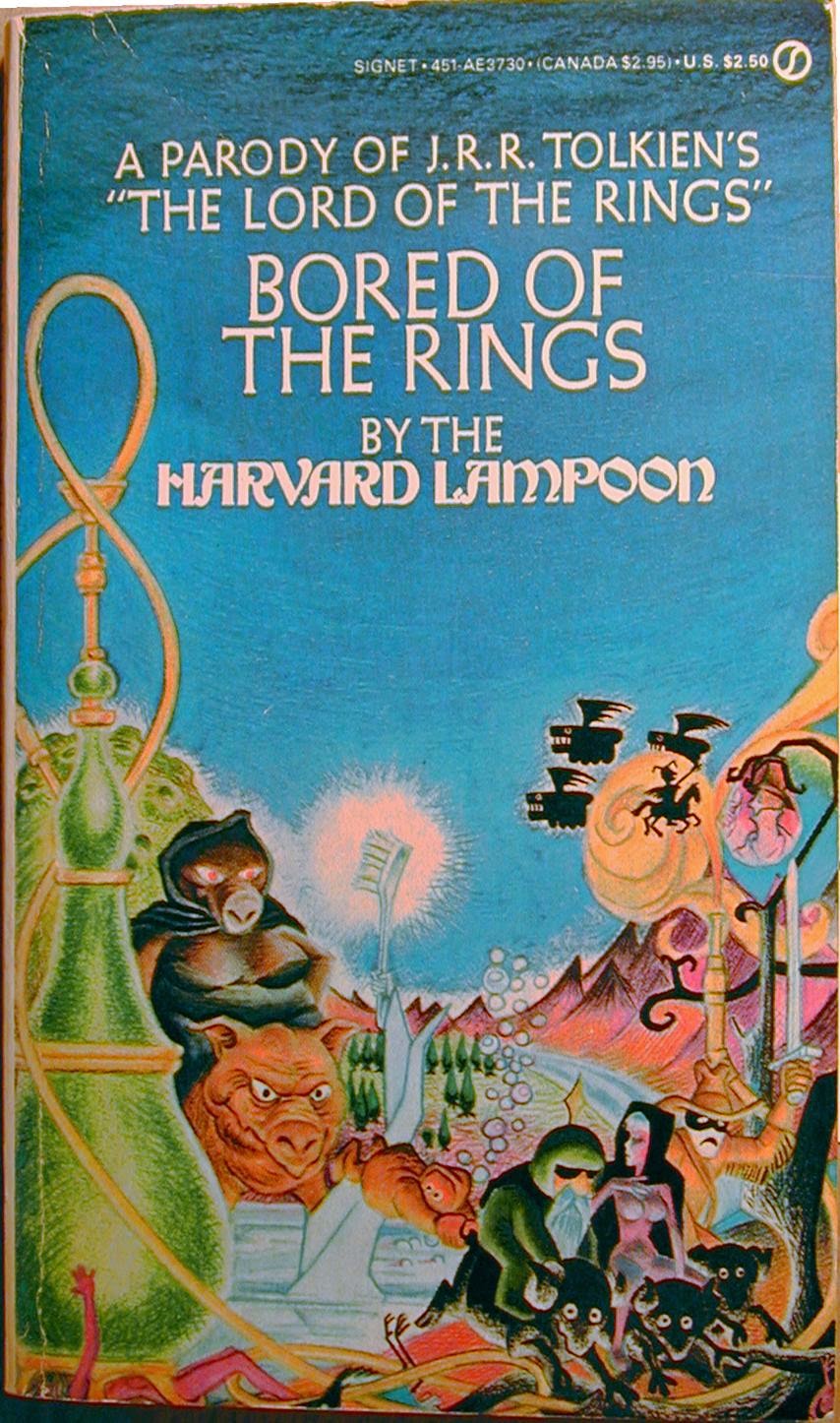 "While there was still a King at Ribroast, the boggies remained nominally his subjects, and to the last battle at Ribroast with the Slumlord of Borax, they sent some snipers, though who they sided with is unclear. There the North Kingdom ended, and the boggies returned to their well-ordered, simple lives, eating and drinking, singing and dancing, and passing bad checks."--Harvard Lampoon, Bored of the Rings


The quote provides a slender glimpse into the uncouth, gluttonous, and devious ways of the Boggie race, but what is beautiful about it is how easily Tolkien's original text lent itself to such an interpretation of his precious Hobbits.  Here's the original text from M. Tolkien:


"While there was still a king they were in name his subjects, but they were, in fact, ruled by their own chieftains and meddled not at all with events in the world outside. To the last battle at Fornost with the Witch-lord of Angmar they sent some bowmen to the aid of the king, or so they maintained, though no tales of Men record it.  But in that war the North Kingdom ended; and then the Hobbits took the land for their own." -- J.R.R. Tolkien, The Fellowship of the Ring  [emphasis mine]

Doesn't Tolkien's text already make the little buggers sound a bit shady?  In the ultimate war to save the Kingdom, the tales of men don't acknowledge any assistance from the Hobblers, and yet they took the land for their own in the ensuing collapse. It's as if they made up the whole squad of archers bit to justify their land-grab even though they were really just a bunch of pint-sized opportunists plucking at low hanging fruit left by the defunct kingdom.  Or, worse yet, they made a deal with the Witch-lord to either stay out of the fray or side with his forces in exchange for the lands.  This might explain why, after wiping out the Men of Fornost, the Witch-lord didn't swoop down on the Hobbits and snarf them up as a post-battle snack.  In this light the deviant bastards of BotR don't seem to fall all that far from their literary progenitors.
Posted by Timrod at 11:42 AM 10 comments: 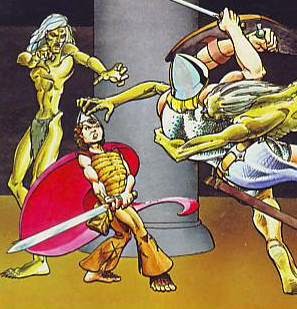 Yesterday's undercooked post failed to mention the influence of Jeff Dee's buff little warriors on my conception of haffers though, clearly, if you've read anything on this blog before you'll have guessed that the ripped fuzz-foot from the cover of V. of H. could not be far from my mind.  [Thankfully Leicester came along to correct the matter in the comments section.]  Anyway, I was going to follow up with a splat-post of Jeff Dee's hobbit beefcake, but a quick internet search proved that Scott Taylor over at Black Gate already did that.

Also, B/X Black Razor's Hobbit Love post is in the spirit of the thing as well.  Ages ago, when I started playing thiefless-S&W White Box, I made halfers default rangers, who were basically sneaky fighters.*  Like JB Black Razor--and despite any previous reference to the boggies of Bored of the Rings--I don't particularly care for AD&D's klepto-rific scions to the kender.

*"But S&W White Box was also ranger-less" you say?  Read on.

I generally think that race as class can suck it, but, despite that, I've slowly been re-hashing the generic D&D races as more individuated--and pigeonholed--classes.  Today, I'm taking on halflings; my version being based somewhat more on the Harvard Lampoon's shrewd and devious boggies than on Prof. T's paeans to pastoral domesticity.

Some things you might not have known about halflings:


They didn't survive as a species by being plump, complacent, homebodies.

To the contrary, they are stealthy by default, dead-eye shots with all forms of missilery, and are masters of the ambuscade.  Quick for their size, they also have developed a form of gang combat that allows them, when attacking larger creatures, to exceed the sum of their parts.  When challenged or in a dangerous setting they actually seem to grow taller--they walk on the balls of their feet when not in a "civilized" setting--and put on a shrewd and even vicious demeanor.


Sneaky bastards, knibbites move silently and hide in shadows as a matter of course and are excellent wall climbers as well; perform all those feats as a thief of 3 levels higher than their own ability level.

They always travel in packs.

There is an adage:


If you see a lone haffie, beware: you're outnumbered 3 to 1.

It is a  common tactic of the small'ns to leave the bulk of their number lying in ambush and then send a small portion of their gang out to gauge the temperament of a party of travelers.  Anyone displaying distemper toward the knibbite delegates will be subjected to a fusillade of lethal missile fire.

Furthermore:
All PC halflings will be accompanied by 1-3 beta haffies.  Beta haffolk are 0-level and equipped with padded armor, sling and dagger.  The PC must provide all other provisions and such.  Betas roll 2d6 + 1 for Str, 1d6 + 12 for Dex, and 2d6 + 6 for Wis.  If the alpha haffie (aka, the PC) should die, the beta haffie with the highest Cha will immediately be promoted to Alpha, and the player may run that haffie as his new PC.
Posted by Timrod at 1:07 PM 2 comments:

Everyone who's ever read a spell list has been puzzled by the presence of Flame Arrow on the 3rd level Magic User spells list.  How could a spell that ignites (1/level) arrows, when touched by the MU, thus allowing them, should they hit their target, to inflict one (1) extra point of damage--be allowed to occupy the same stage as Fireball, Lightning Bolt, Fly, Haste, etc.?  Any party with a torch can do the same thing without an MU, so why would any self-respecting Thaumaturge forgo one of the numerous useful 3rd level spells for this turkey?  The answer is simple: no one would and and no one ever has, ever.  So either Flame Arrow needs to be demoted to the zero-level spell list where it belongs or it needs a serious upgrade.

Hackmaster of course does it better, allowing an option that essentially lets the MU cast a firebolt that causes 4 or 5d6 damage; it's sort of a mini-fireball without all the risk to your dungeoneering cronies. But I'd like to take the idea behind the AD&D version of the spell and maybe make it worthy of being a spell that a 5th level MU would opt to have in his pocket.

Inspired by Rients' rant about fireballs from a few weeks back--and simultaneously filling in a glaring omission in Delta Dan's Spells Through the Ages Series--I decided to investigate the numerous versions of every one's favorite spell of incendiary devastation in the most beloved of all editions of D&D: HackMaster!

That's right, HackMaster has 20 different Fireball spells, at least 2 are available at each spell level (except 7th, which gets but one).  Yes, there are not one but two versions available to Prestifidigitatarions. And in case you have to ask: yes they're all "volumetric" and you will roast your party and yourself if you cast one in tight quarters.

1st Level
Fireball barrage: Actually, this one isn't volumetric; it lets you cast a single-serving-sized fireball at a single target.  You get to blast one fire ball per round per level for a staggering 1d3 pts. of damage.  Presumably, the purpose of this spell is for the MU to light the candles in his laboratory without having to get up from his studies.
Sidewinder Factor 1: sidewinder fireballs can slither around walls and over obstacles to get to their target... where they will deliver 1d6-4 whopping pts of dmg/level of MU. Also, sub-freezing temperatures reduce the range of the spell by 10' per degree F below freezing.  So at 22 degrees F (-4 or -5 C maybe?) it's effective range is 0 and you've cast it on yourself.  Better have an accurate thermometer on hand.
2nd Level
Skipping Betty: a single 10' r. fireball skips across the ground each round until it finds a target and detonates.
Sidewinder Factor 2: as Factor 1 but slightly more damage. 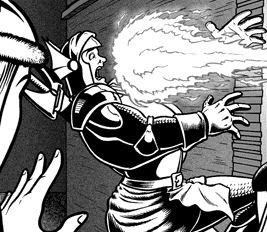 3rd Level
Fireball: Yep, here it is in all its volumetric beauty, except it's been de-fanged a bit in that it causes only 1d4/level damage.  Weird.
Scatter-Blast: causes 1d6 separate 10'r. fireballs to go off in a randomly determined direction and distance.  Don't try this one underground... or anywhere else.
Sidewinder Factor 3: as Factor 2 but slightly more damage.
4th Level
Landscraper: Before I read the description of this spell, I thought it would maybe create a conflagration that would spread along the terrain conforming to contours sort of like how the mist from dry ice flows over the ground, except, ya' know, it would be fiery.  I was wrong.  Instead, it's just like a normal fireball but the "area of effect is increased by a 5ft. wide by 10' high parallelepiped* that extends back to the caster from the center of the main fireball."  Which is to say, after the blast fills its 33,000 cf of space, it then reaches out a little appendage in one last effort to reach the MU.  No idea why that would make it a 4th level spell, or what it has to do with scraping land.
Sidewinder Factor 4: as Factor 3 but slightly more damage.
Volley: Launch one 10' r. fireball per round for the duration of the spell, each does 3d6 dmg.
5th Level
Sidewinder Factor 5: as Factor 4 but slightly more damage.
Torrential: Area of effect is doubled to 40' r. sphere.  Does 1d6 per level.
6th Level
Show-No-Mercy: like a normal fireball but dmg is 1d8/level.
Proximity Fused: Spell is cast on a point in space and detonates only when someone approaches within 10' of this point.
7th level
Delayed Blast: just like it sounds.
8th Level
Death Brusher: "This spell is the same as the 3rd level spell Fireball, except [the casting time is 8 segments instead of 3].  In addition, those taking damage from the Fireball must pass a system shock roll or be instantly slain."  I friggin' love HackMaster.
Maximus: Same as regular fireballs except damage is d10/level of MU.
9th Level
Lava Yield: Damage is 1d12/level and it melts stone within the area of effect.
Nuclear Winter: The spell description reads:"This spell has been rescinded in HackMaster 4th Edition."  And for good reason: the 20-mile radius area of effect, as indicated in the statblock for the spell, would make it more than a little ungainly.

In conclusion, there is no standard, 1d6/level fireball, but there are plenty of variants.

*A parallelepiped, as it turns out, is a rectangular cube, if that makes sense.  A very useful word, but so tragically cumbersome that it should not come as a surprise that the HackMaster rulebook is the only known usage of the term in a sentence.