2001 Hackmaster: GameMaster's Guide. p. 153 In this version, Emerikol himself seems to be the victim, harassed as he is by a mob in close pursuit.  He appears to be out of death rays for the day, and indeed, a bystander has beaned him in the head with an apple [EDIT: obviously, it's a rock] while another appears to be dumping their slops on him from a window above. No respect. This mostly decent reinterpretation is somewhat marred by the bizarre method of rendering the swift movement of feet that the illustrator chose to utilize. Several short quick action strokes give the impression of rapid movement but it's as if the lower extremities of the horse and swordsman-exiting-the-tavern are vibrating back and forth, not racing to action.  Not sure what the illustrator was going for but it failed. 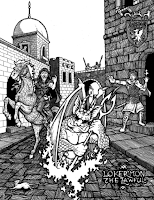 I recall seeing another discussion of the original image some time ago noting that the street view is taken from an actual street in Europe. And that Emirikol is riding toward a dead end....

He shoulda' sprung for the GPS option on his steed.

Ah, here it is - I should have used my google-fu: