It's hard to believe that in twelve--12!!!--sporadic years in the blogging business, I've never done a piece on taverns. Well, that streak ends today.
I have always had a thing for taverns in D&D, so the next time you complain about what a cliche it is for an adventure to start out with an encounter in a tavern, I won't hear you because I'll already be quaffing a pint while listening to the minstrel noodling by the fire.

I also have a thing for old timey modules--as you may have noticed by my extensive rants about Hommlet, Saltmarsh, Bone Hill, and, most recently, the Slaver series. So today I'm going to dig into the taverns and inns that provide hospitality in a few of these old settings.

But I'm going to look not at the the taverns themselves, but the signs hanging out front. These are the shingles that are intended to indicate the name of the place to the PCs as they wander into town. I went back through the classic AD&D modules (I define classic as published back when they still listed all the available D&D products on the back of modules, a practice which ended ~1983, I believe). Also some of these modules feature more than one ale house; I'm only addressing the ones I can remember.
For this analysis, I'm including the text from the module describing the sign, a likely interpretation of that sign, and any significant notes relating to the sign or its meaning from the module.
Inn of the Welcome Wench (T1 Village of 'omlet)
Sign Description: "The square wooden sign shows a buxom and smiling girl holding a flagon of beer."
Likely Name: Inn of the Buxom Wench
Significance: If you thought we were going to start with some other tavern, then this is probably your first time here and I offer my sincerest greetings to you. I've always called this place the Buxom Wench, but I was an adolescent when I first encountered it and I haven't really grown up in the ensuing decades.
Inn of the Slumbering Serpent (N1 Against the Cult of the Reptile God)
Sign Description: "A large, colorful sign pictures a red dragon with its headresting contentedly on its paws. A plume of smoke risesfrom the serpent's nose and its eyes are closed."
Likely Name: Sleeping Dragon
Significance: Given that the name of the adventure is "Against the Cult of the Reptile God"; if you wander into a town with an inn named the Slumbering Serpent, are you going to stay in it? No. But if you see a sign with a sleeping dragon on it? I think of dragons as scaly magical beasts not reptiles, so sure, I'd stay there. Aside: do dragons have "paws"? 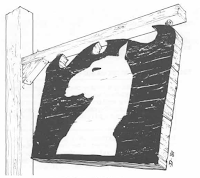 Sign of the White Knight (A3 Assault on the Aerie of the Slave Lords)
Sign Description: "Above the door is a painted chesspiece-a White Knight" (see illustration)
Likely Name: Horse Head, White Horse, Chess Piece
Significance: When they enter Sunderholm the party is given a clue to "Seek out the Ivory Paladin." This establishment is the place that the clue is intended to indicate. While the horsehead on the sign is pretty obviously a chess piece, without the flavor text it's not all that certain that the players are going to see it and make the connection: white horse head = white knight = ivory paladin.Why didn't the clue just say "Go to the White Knight on the corner of Dave St. & North Arneson and ask for Gary"? Because it's a tournament dungeon Dice Chucker, that's why.
Inn of the Dying Minotaur (L1 Secret of Bone Hill)
Sign Description: The sign is not described in the text, but "Geilcuff, the innkeeper has a minotaur's head stuffed and hung up on the wall above the bar."
Likely Name: Bull's Head
Significance: Everyone knows that a minotaur is a creature with the body of a man and the head of a bull, so that "minotaur" head over the bar is probably just the head of a bull that Geilcuff bought from the slaughterhouse.
House of Abraham (L2 Assassins Knot)*
Sign Description:  "a large bright green shingle that reads, 'House of Abraham:Food, Lodging and Ale.' In the center of the shingle is a pictureof a smiling man holding out a large tankard of ale."
Likely Name: Abe's Place
Significance: Lakofka cheated us here by assuming a high literacy rate in Assassinsburg.
Blood of the Vine (I6 Ravenloft)*
Sign Description: the sign "proclaims" this to be the "Blood ofn the Vine"
Likely Name: Well, Blood on the Vine, I guess
Significance: Literacy trumps good sign design once again, this one devoid entirely of illustration. But it is written into the module that some wag has vandalized the sign, scratching out the "f" in "of" and replacing it with an "n" to add to the macabre tone of Ravenloft.
*In addition to having signs with words on them instead of pictures, other TSR products were not listed on the back of these modules when first published. So maybe I can also use literate tavern signs as an indication of the end of the classic module era.
Posted by Timrod at 10:35 AM