Since loads of you haven't got any interest in asking me which TSR-published tomes make up the Dicechucker's Greyhawk Canon, I'll save you the trouble. Below are the sources which I require and/or accept as part of my Greyhawk-ian canon, as well as some that seem canon-y but that I don't put much stock in.

Fundamental:
The World of Greyhawk Gazetteer, this is the 32 page booklet that came with the 1980 Folio edition. Since it predates the boxed set by 3 years, and since the boxed set tended to introduce errors--Invoked devastation of Colorless Fire anyone?--it's probably more accurate.

T1 Village of Hommlet If you've ever read the Gazetteer, you already know that no module is more intrinsically linked to the WoG than T1. Not only is this one of the only modules mentioned by name in the Gaz, the events described in T1 also get a paragraph write up in the Chronology plus further treatment under the Verbabonc heading.

S3 Expedition to the Barrier Peaks As discussed elsewhere, this one establishes the origin story of the Oeridian people.

U1 Sinister Secret of Saltmarsh Thanks to this one we learn that the south coast of Keoland = Southern England.

L1&2 The Secret of Bone Hillenford. You knew it was coming. I like that Len Lakofka took on the role of humanizing the modern day Suel culture. That said, because my campaigns are always left-map-centric, I've moved Restenford and its environs to the Flotsam Jetsam Islands off the coast of the Hold of the Sea Princes. 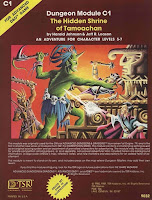 C1 Hidden Shrine of Tamoachan I was obsessed with this module as a youth, and I credit it as the primary inspiration for my decision to go to Mexico for a semester abroad when I was in college. Provides excellent campaign inspiration for adventuring in Hepmonaland. I may one day move this up to Fundamental status if I ever get over my left-map-centrism.

C2 Ghost Tower of Inverness While the dungeon itself can be located pretty much anywhere, the backgrounds provided for the pre-generated characters allude to the intriguing state of affairs in the Duchy (County?) of Urnst.

A Guide to the World of Greyhawk, from the 1983 Boxed set, provides some additional information on the setting, particularly the deities and various ethnic groups of the Flannaes. Though I generally appreciate most of the additional info provided in this version, there are things about it I choose to ignore. For instance, there's some mention of a tunnel that the Suel built to escape the Rain of Colorless Fire. In my mind, that event was so sudden and complete in its destruction that it put a fairly immediate end to all Suloise migration in any direction. Maybe the Invoked Devastation left a few people standing, but the Rain of Colorless Fire reduced an entire kingdom to dust! You are not straggling out of that wasteland a few months later.


Undemental:  Books you might think are essential but I have completely disregarded


S1 and S2: Despite their pedigree, there's nothing about Tomb of Horrors or White Plume Mountain that ties them in any essential way to the WoG, and that's fine. You can port these bad boys to your own game world, or Middle Earth or freakin' Narnia if you want and they'll fit right in. In fact, the second biggest shortcoming of Keith Francis Strohm's disappointing Tomb of Horrors novelization was that the author spent two thirds of the novel shoe-horning the Tomb into the geopolitical context of latter day Greyhawk instead of investigating a creepy, death trap-laden dungeon and defeating a powerful undead mage. [The biggest shortcoming of the book is that he spent the final third of the book failing to make the investigation of a creepy, death trap-laden dungeon seem at all creepy or dangerous--unless you were one of the dozens of unnamed red-shirts the main characters brought along to walk into all the traps for them.] 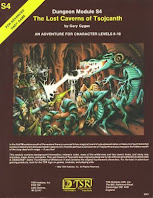 S4 The Lost Caverns of Tsojcanth With this module, Gygax really started nailing down the mythos of Greyhawk, and there's some really good stuff in it. But it never grabbed me the way Hommlet did. It's got cool magic items, an interesting backstory, and Erol Otus's excellent cover illustration. That said, I feel like it set the table for the sort of epic power-gaming that begat Dragonlance.

Though WG4 The Forgotten Temple of Tharizdun also lays substantial groundwork for the Epic Greyhawk mythos and came out at around the same time as Tsojcanth, it lacked the prestigious S- prefix and was largely overlooked by gamers at the time. I have no idea if that statement is substantiated by reality, but I do know that the gamers in my circle (a small sample size to be sure) held the S- modules in high regard, while no one thought much of this, the first 2-lettered TSR module. Also not helped by the pale lavender cover, the weird cover art depicting a faceless wizard surrounded by bulbous and equally faceless snake-worms, or the fact that lead-in modules WG 1-3 do not exist. I remember the lone copy of this module loitering in the D&D display stand in the store in town for about 3 years before one of my friends finally wiped off the dust and bought the thing.

T1-4 Temple of Elemental Evil I was of the generation that played T1 long before this follow up hit the shelves and found the publication of this continuation module to be a nuisance because we'd already made up our own conclusion to the Elemental Evil saga.

Might I point out that the Hidden Shrine of Tamaochan is found in the Ameido Jungle, which is south of the Sea Princes - and therefore on the "Left" side of the map.

Well crap. I thought it was in Hepmonaland. Oh well.